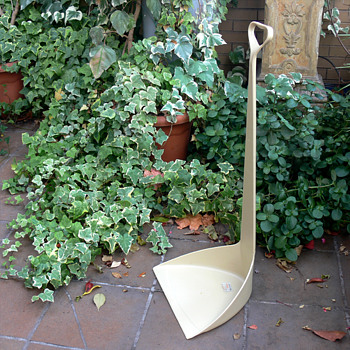 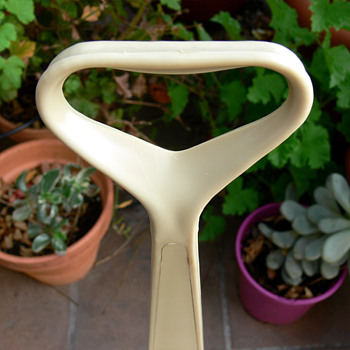 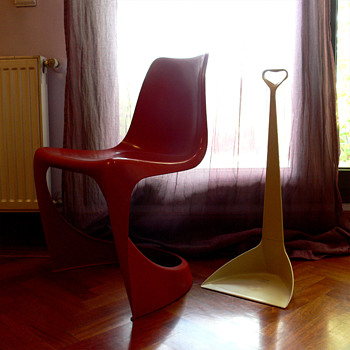 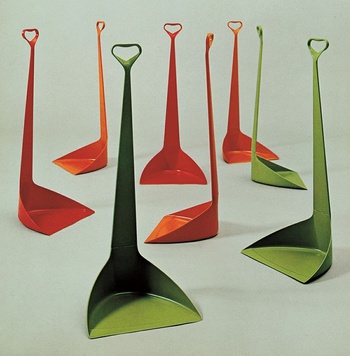 As I've joked before, whenever you open a door or a cupboard at Carlos's place, you find a treasure. This time the treasure has got the signature of the Italian designer Gino Colombini, and is this amazing dustpan designed for Kartell in 1959.

Actually, this dustpan has been at Carlos's studio for years, and has been thoroughly used, although it's in a close to perfect condition. It's even got the label from the famous Spanish department store it was bought at with its original price: 850... we're not sure it would be 850 pesetas (around 5 euros), a crazy price for a dustpan at the time it was bought... Or maybe was t 85 pesetas, or maybe, 8,50? :) In any case, acording to the state it's in, it was well worth spending every cent it costed. Who else is using a dustpan bought in the 60s?

The dustpan is made of plastic and consists of three different pieces: one for the pan and two for the handle. Its looks really have the 60's spirit, even if it was designed in the 1959 (although some sources say it was designed in 1957). Colombini did excell in creating everyday use items with an extraordinary modern design.

This time I've been unable to take a nice picture of the item on a white background as the dustpan is far too big for my lightbox, so I've taken pics of it in the terrace and in the house. On pic.2 I'm showing you an amazing close view of the handle, which is one of its most outstanding features. On pic.3 you can see it by one of Steen Østergaard's CADO chairs (as you can see, they both share an excellent design!). pic.4 shows a period picture of several dustpans in green and orange. they're absolutely stunning!

By the way, they've got one like this at the MOMA :)

Gino Colombini worked from 1943 in the Milan practice of the architect and designer Franco Albini. From 1953 until 1960 Gino Colombini was technical director of Kartell, which was founded by Giulio Castelli to specialize in articles made of plastic. Kartell made utilitarian appliances and objects of plastic that were beautifully designed products, no longer dreary and colorlesss but colorful and modern.

Gino Colombini designed many of these household items and, in so doing, revolutionized these small everyday things and made them affordable. Objects designed by Gino Colombini include a carpet beater (1957), a lemon squeezer (1958), plastic wash basins, salad colanders, and lunch boxes, and, in 1959, a long-handled cleaning scoop to be used instead of a dustpan [THIS IS IT :) ]. Particularly well known is Gino Colombini's 1965 round umbrella stand made of ABS plastic, topped with a steel ashtray.