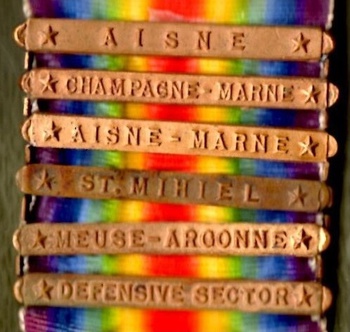 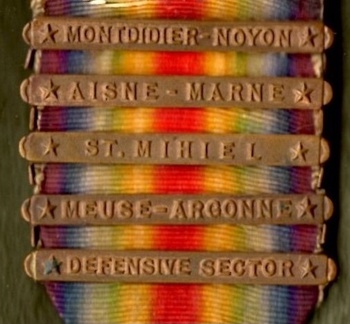 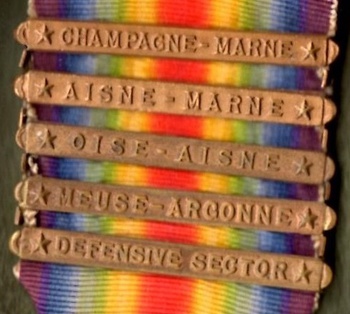 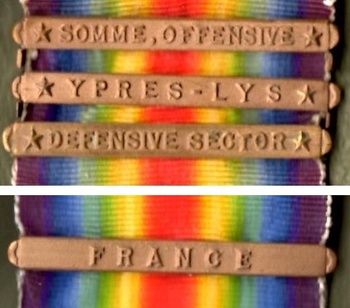 Here is a breakdown of the clasps on the victory medals in my last three posts. Clasps were awarded to the individual, not the unit. If someone was a replacement, was wounded or sick, or transferred out of the division, his medal may not show all the major engagements the division participated in.

AISNE: In May 1918 the Germans mounted an offensive on the Aisne Front. Reserves were rushed in, including two American Divisions. The 2nd Div blocked the main route to Paris, stopping the advance there. The 3rd Div moved to Chateau Thierry and blocked the Germans from crossing the Marne River.

MONTDIDIER-NOYON: In June 1918 the Germans launched an offensive between Montdidier and Nyon, where the 1st Division held the line despite heavy bombardment. From 9-13 June the division suffered 567 casualties.

CHAMPAIGNE-MARNE: The German offensive in Aisne created a large salient toward Paris, and in July 1918 The Germans launched an attack to exploit it. American divisions encountered heavy fighting but the Germans stopped after sustaining heavy losses.

AISNE-MARNE: The Germans in Aisne failed to capture a vital railway hub at Reims. As a result 40 German Divisions were dependent on one rail line through Soissons. Following a plan by General Pershing, The thrust by the French and Americans towards Soissons forced the Germans to withdraw.

SOMME, OFFENSIVE: Starting in August 1918, the allies conducted a series of offensives in order to continue pressure on the Germans. The first was the British led Somme Offensive east of Amiens. The Americans conducted operations in support of the offensive until the end of the war.

OISE-AISNE: Following the Somme Offensive, the French lead the Oise-Aisne Offensive to push the Germans out of their positions along the Vesle and Aisne Rivers. American divisions were heavily involved in the pursuit of the withdrawing Germans.

YPRES-LYS: During the Somme Offensive, the Germans began to withdraw from the Lys salient, south of Ypres. The American divisions facing them along with the British took advantage of the withdrawal to force a new line of contact. At this point the Germans were in retreat all along the Western Front.

ST. MIHIEL: General Pershing wanted the Americans to fight as an independent army, but had been delayed by deployment of American divisions in support of the French and British. In September 1918 he was finally able to lead three American Corps (over half a million men) against the St Mihiel Salient.

MEUSE-ARGONNE: In the final push, the American First Army advanced northward between the Meuse River and Argonne Forrest. It was the largest American acton of the war, involving over a million troops and 47 days of fighting. The Americans had reached Sedan when the Germans requested an armistice.

DEFFENSIVE SECTOR: General Pershing himself requested a battle clasp to recognize soldiers who, regardless of whether or not they were in a major campaign, had been on the front lines. Even without a major battle, these soldiers faced artillery, aerial bombardment, gas, raids and snipers.

The FRANCE service clasp was awarded to those who served in the Allied Expeditionary Force in France and Belgium before the Armistice, but did not qualify for battle clasps.

There are other battle clasps for CAMBRAI, SOMME DEFENSIVE, LYS and VITTORIO-VENETO, but U.S. involvement was at regimental level or less. There are other service clasps for ITALY, RUSSIA, ENGLAND and SIBERIA but maneuver divisions did not operate in these areas.

Wishing you all a pleasant and thoughtful Remembrance/Veteran’s Day,