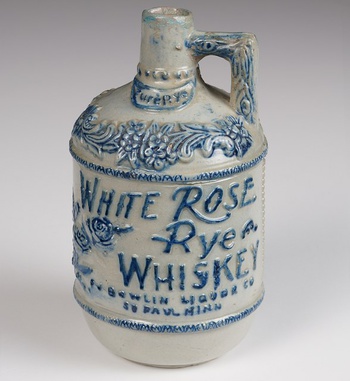 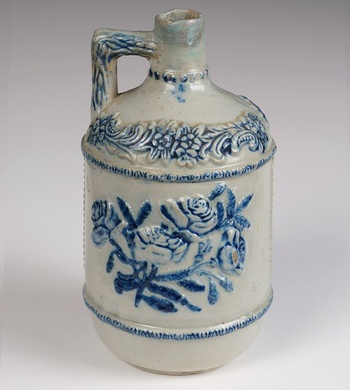 This is a nice White Rose Rye Whiskey stoneware advertising jug dating to around 1904. I was moved to purchasing it years ago because its intricate design is quite a contrast to the plain whiskey jugs normally seen. (Besides ... my wife likes roses!)

Patrick Bowlin contacted Whites Pottery of Utica New York to make these attractive jugs for his business “P. J. Bowlin Liquor Co., St. Paul, Minn.” They were originally thought to have been made by Red Wing Union Stoneware Co. (which was renamed Redwing Potteries in 1926). P.J. Bowlin Liquor Co. was a wine and liquor wholesaler and retailer in St. Paul from about 1904 to 1916.

Bowlin put a lot of thought into packaging his rye whiskey. Wonderfully vivid cobalt blue relief is set against a gray background. Roses adorn the jug on the front and back. There is also a “Pure Rye” medallion at the base of the neck. Another attractive aspect of the workmanship is that the handle is made to look like a rose bush stem.