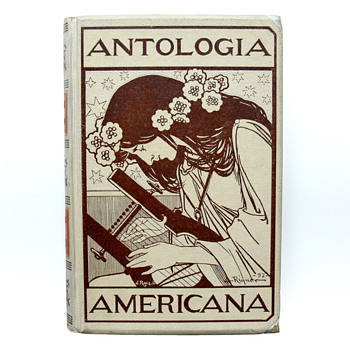 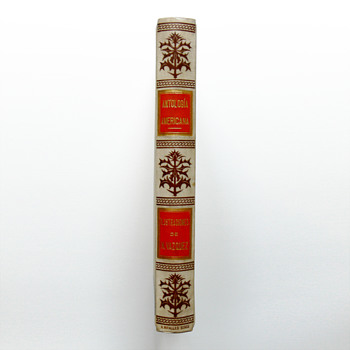 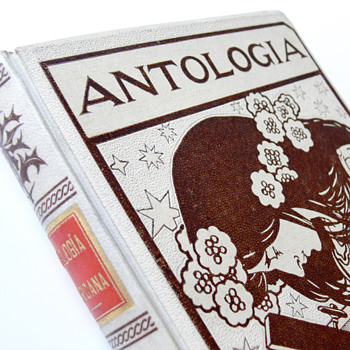 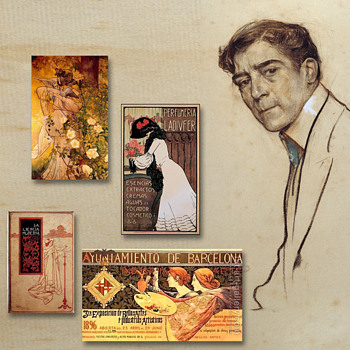 This was one of my gifts to Carlos on our 3rd anniversary. I have to say I gave him lots of books... only I wasn't patient enough and I spent the two months prior to our anniversary giving him a book every couple of weeks.

I think he loved this -and a couple more Spanish books- because they're actually quite rare.

this book is an anthology of Spanish American poetry. I find the illustration very adequate to it.

Alexandre de Riquer i Ynglada, 7th Count of Casa Dávalos (1856 - 1920), was a versatile Spanish designer, illustrator, painter, engraver, writer and poet. He was one of the leading figures of Catalan Art Nouveau.

Riquer studied in France and due to his interest in the drawing classes he enrolled in the School of Fine Arts in Toulouse. Then returned to Barcelona to continue his studies at the art school of La Llotja. He entered the world of publishing, mostly ornamental lettering and cover illustration. In the following years he designed jewelry, programs, furniture decoration and ceramic painting.

English art and Japanese art caused a great influence on his creations. (in fact, in this design one can see some features that remind us of Aubrey Beardsley) Riquer distinguished himself as a graphic designer with great drawing skills. He made posters, etchings, illustrations in books and magazines, certificates, postcards, stamps, menus, sheet music, business cards and bookplates (up to 142 of them between 1900 and 1924).

And just a curio about him: one of the reasons why he worked so much is that during the 12 years after his marriage, he had nine kids!!! That is something! :)