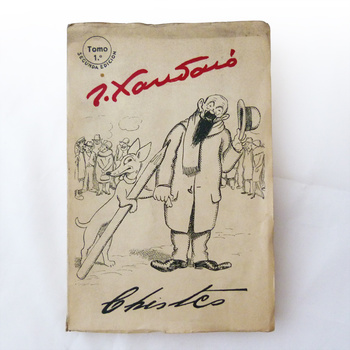 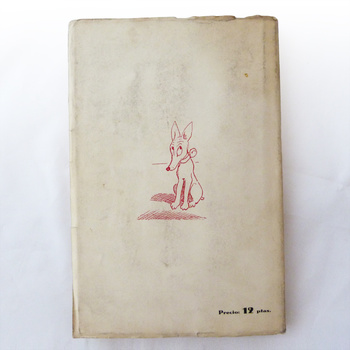 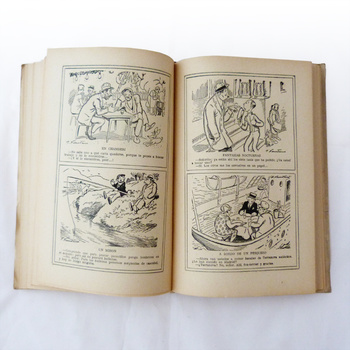 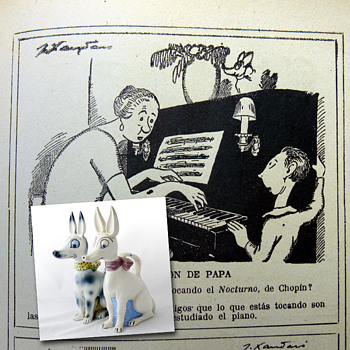 Nine months ago I shared a post on two Art Déco “botijos” in the shape of dogs. These dogs had been made after Joaquín Xaudaró's famous dog that used to appear in virtually all his drawings ( http://www.collectorsweekly.com/stories/116019-art-deco-botijos-in-the-shape-of-the-x?in=collection-2126 ).

We just found one of Xaudaró's books: a compilation of graphic humour, and as you can see on the cover -and back cover- the dog is an important character! (pics.1 and 2) I have to say the dog appears in every single vignette (see pic.3), BUT there are two vignettes were the dog isn't alive...
In one of them, taking place in a doctor's office at a hospital, where puppies are not allowed, the dog is dead and kept in a big jar full of formaldehyde. On the second one (pic.4), the dog appears in the shape of a ceramic figurine or botijo -just like the ones I shared seven months ago- placed on top of a piano...

So you can learn more about Xaudaró, here's what's said about it at the Wikipedia:
“Joaquín Xaudaró y Echau (August 17, 1872 – 1933) was a Spanish cartoonist, illustrator, and caricaturist. His humorous depictions of the new technologies of his time –he published a volume of cartoons called The Perils of Flight (Les péripéties de l'aviation, Garnier Frères, Paris, 1911)- serve as an important link between the worlds of nineteenth-century illustration and twentieth-century cartooning. Xaudaró's observations on contemporary culture and technology, as well as his gentle but insightful sense of humor, are apparent in such cartoons as "El telégrafo sin hilos," "Un retrato futurista," "El auto que pasa," "Despertar en Biarritz," "El leopardo inglés en Spyon-Kop."
Born in Vigan in the Philippines (at the time still a Spanish possession), Xaudaró's family, of Aragonese origin, settled in Barcelona in 1883. Xaudaró was educated in Paris and London. He began his career drawing for Madrid Cómico, La Saeta, Gedeón, and Barcelona Cómica, a Barcelona-based humor magazine of the 1890s, occasionally utilizing the pseudonym J. O'Raduax ("Xaudaró" spelled backwards). Between 1907 and 1914, he also drew for the Paris-based periodical Le Rire.
Xaudaró subsequently worked for the Madrid-based periodicals Blanco y Negro and ABC. His daily vignettes for ABC brought him fame, with each one containing a trademark little dog that soon became known as "el perrito de Xaudaró."
His book illustrations include those commissioned by the Paris publisher Ollendorff (Les conteurs joyeux), and famously, those utilized for Juan Pérez Zúñiga's Los viajes morrocotudos ("The Fantastic Voyages"). Xaudaró's works of collected cartoons include Los Sports, an album of sports-related vignettes published by Editorial Luis Tasso in the 1920s and Xaudaró: Tomos de Chistes (ca. 1932), a collection of his work that had been published in Blanco y Negro at the end of the nineteenth century.
Xaudaró also did scenographical work for a production of Madame Butterfly. At the end of his life, he founded, with Antonio Got and K-Hito, the Sociedad Española de Dibujos Animados (SEDA) in 1932.He collaborated on an animated film with K-Hito. Xaudaró died in Madrid.”