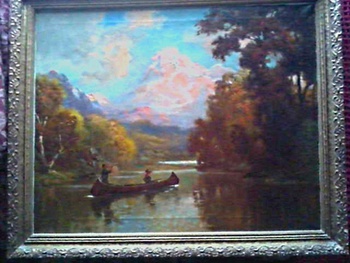 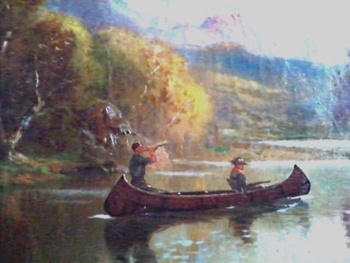 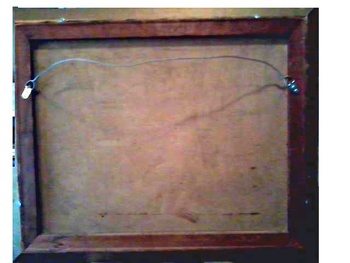 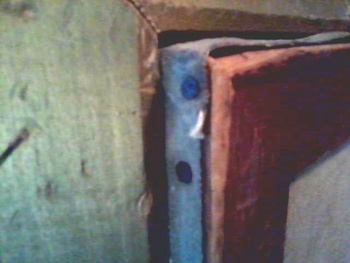 I usually avoid Volunteer's of America on the last Tuesday of the month because their half price off the whole store sale is insane. I always go back the day after and while picked over they also start to put out new items as well. Today was no exception as I found this beautiful autumn landscape painting just waiting for me. The subject seems to be moose hunting. The person in the back of the canoe is blowing the moose call as the hunter sits with his gun at the ready in the front. It appears to be old but with newer mounting hardware. The stretcher and canvas show their age. It's tacked and not stapled. I'm not sure about the frame if it's original or not. The painting looks to be in the style of the" Tonalists" or the "Hudson River School" of painting.

Wikipedia's definition is as follows :

The Hudson River School was a mid-19th century American art movement embodied by a group of landscape painters whose aesthetic vision was influenced by romanticism. The paintings for which the movement is named depict the Hudson River Valley and the surrounding area, including the Catskill, Adirondack, and the White Mountains; eventually works by the second generation of artists associated with the school expanded to include other locales in New England, the Maritimes, the American West, and South America. Hudson River School paintings reflect three themes of America in the 19th century: discovery, exploration, and settlement. The paintings also depict the American landscape as a pastoral setting, where human beings and nature coexist peacefully. Hudson River School landscapes are characterized by their realistic, detailed, and sometimes idealized portrayal of nature, often juxtaposing peaceful agriculture and the remaining wilderness, which was fast disappearing from the Hudson Valley just as it was coming to be appreciated for its qualities of ruggedness and sublimity.
This painting is not signed anywhere that I can see so I don't think it's by any of the famous artists like George Inness, Thomas Cole or Fredrick Church. Still I think it's an interesting work inspired by that movement. -Mike-