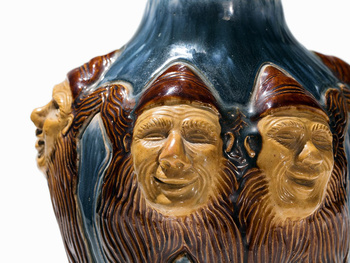 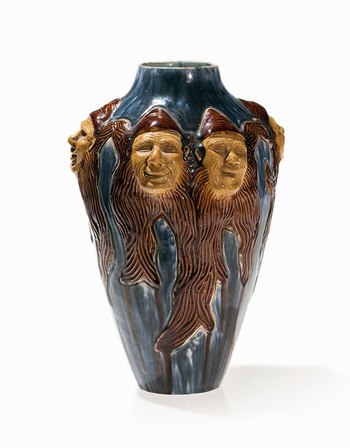 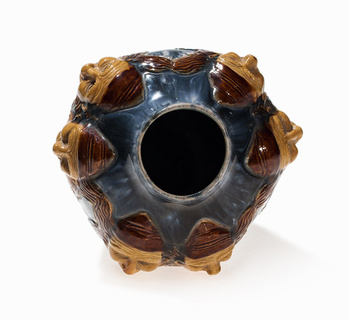 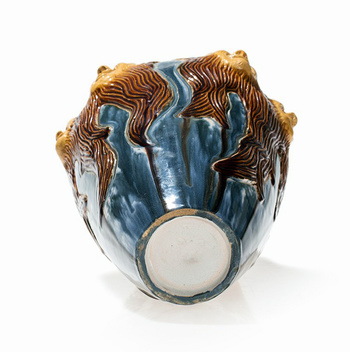 Whimsical early stoneware ceramic "Dwarves" vase by Hoganas (Sweden) and designed by notable artist, Helmer Osslund (1866-1938). Blue background with earthen tone colored dwarves. Each dwarf has different facial features, but all have jolly expressions and long trailing beards that undulate underneath them. Two examples of this vase are known.

Underside marks, “632, Hoganas (obscured), GA.” The GA mark refers to Gustaf Ahlström or Gustaf Ahlberg, both of whom were lifelong potters for Hoganas first employed in 1852 at the age ~12-13 years old. The “632” numbering is consistent with known Hoganas production between the years 1896 and 1897 (#631-1064) and reinforce the likelihood that this vase/form was featured as part of Hoganas’ works during the 1897 Arts & Industry Exhibition in Stockholm. Dimensions: 11.5"(H) x 5.5"(W).
---------------
Jonas Helmer Osslund (born 9/22/1866 in Tuna , Medelpad, died 7/11/1938 in Stockholm) was a notable Swedish artist and designer. Osslund was born as Aslund, and was the half-brother of Frida Aslund, but changed his name after moving to America to study to be an engineer. At 21 yrs, Osslund began painting and was employed as a decorator at Gustavsberg porcelain from 1889 -94. In 1890, he financed study abroad to Paris and London. Osslund began to study at the Académie Colarossi in Paris in spring 1894, and it was there that he studied under Paul Gauguin, whose symbolist view of color and form guided Osslund in his subsequent landscape, portrait and modeling studies. Osslund returned to Sweden in the late 1890s where he worked for a brief period with Hoganas Pottery during the winter of 1896-97 to assist with the company’s 100th anniversary and showing of wares at the 1897 Arts & Industry Exhibition in Stockholm. Osslund then turned to painting and produced the dynamically expressive landscape art that has become his artistic hallmark. Osslund retired to Granvåg outside Sollefteå where he maintained a studio and summer home. Osslund was buried at Sollefteå cemetery. His personal papers are cataloged at the Research Archives, Umeå University Library.