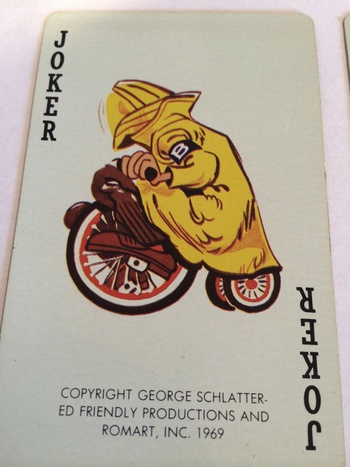 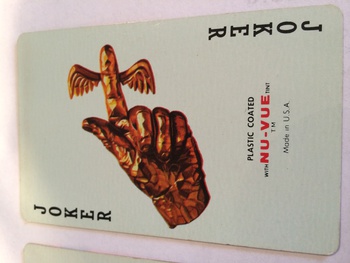 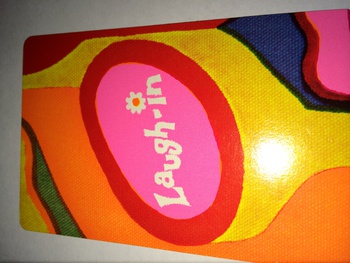 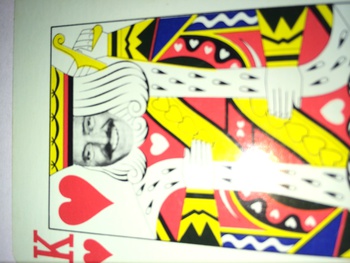 First: a trivia question with a little historical intro:

As we all know, today there are hundreds of television programs and lots of time-shifted viewing so the days when a large chunk of television viewers (or even the public) tuned in to watch the same show at the same time are long gone. Even big events like the Superbowl no longer get half of the viewing audience. Long ago, it wasn't like this.

Question: What was the last regularly scheduled television program to regularly win over half of the TV viewing audience?

I remember when my family bought a color TV primarily so we could watch the Laugh-In in color.

The term "Laugh-In" was a play on the "love-ins" or "be-ins" of the 1960s hippie culture, terms that were, in turn, derived from "sit-ins", common in protests associated with civil rights and anti-war demonstrations of the time.

I think I bought my Laugh In deck of playing cards in a store in the early 70s. It is dated 1969. I have the full deck but of course, my real interest in these two jokers.

The other joker features (and I'm quoting Wikipedia) an unnamed "man in a yellow raincoat" and hat, riding a tricycle, then tipping over and falling, frequently used between sketches.

Note. I did cite some info that I learned from Wikipedia. I have no source for the point about this being the last program to get over half of the audience. Wikipedia does report that it was the number one show for two seasons. I suppose I could look up somewhere the size of the viewing audience and the share that the program had for its two hit seasons.