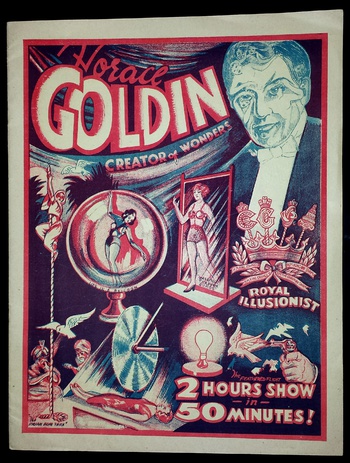 This is an original pitch book for Magician Horace Goldin from my private collection of Magic ephemera ca. 1930. It is in EXCELLENT condition! Simply one of the GREATEST images from the Golden Age of Magic! Can you count the many women that make up Horace Goldin's face? And find the hidden imp??

Horace Goldin (December 17, 1873 – August 22, 1939) was a stage magician who was noted for his lightning fast presentation style, Goldin did tricks quickly one after another without speaking and became known as "The Whirlwind Illusionist". With this act he found success in vaudeville and began touring the United States.

In 1915 he set out on a long tour of the Far East but this ended in disaster in 1918 when a boat carrying his equipment sank at Lahaina, Hawaii. Worse still, Goldin distrusted banks and carried his money with him (reputedly in gold) and that sank to the bottom along with his props. He was forced into bankruptcy on returning home. However he was about to enter the most successful phase of his career with his development of the illusion "Sawing a Woman in Half", despite the debate that P.T. Selbit publicly presented this illusion first.

Goldin died on 22 August 1939 at his home following a show at the Wood Green Empire Theatre in London. Twenty-one years earlier at that venue a magician named Chung Ling Soo had been killed while performing the "Bullet Catch" illusion. Goldin performed the same trick successfully but died in his sleep later.

Magic Book -The Art of Astonishment...
$50
See all