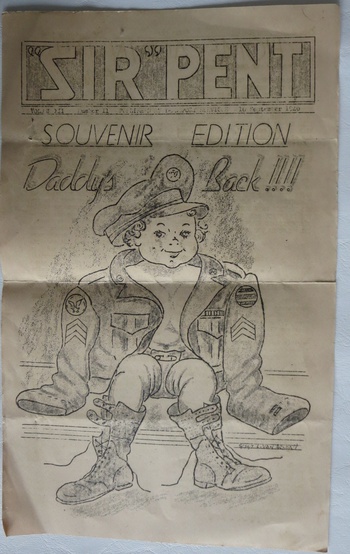 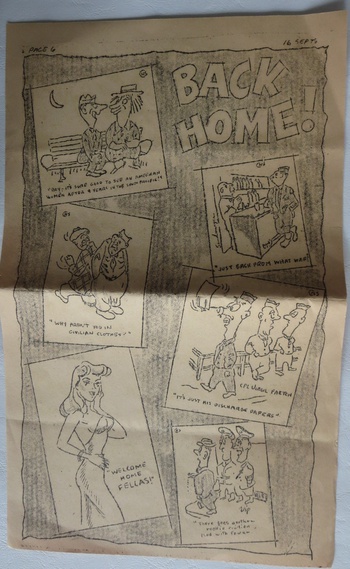 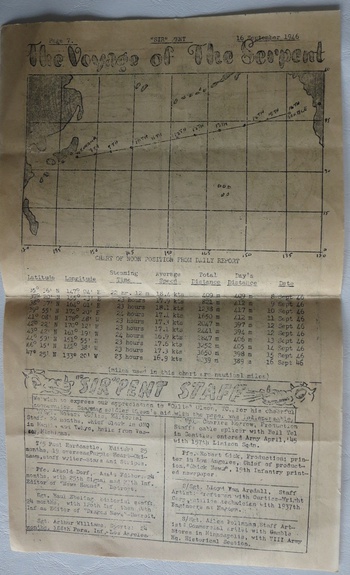 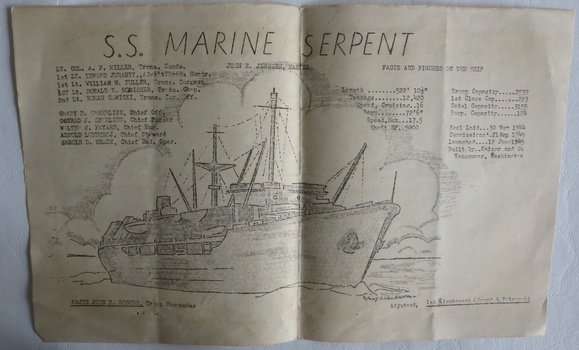 This is the last voyage day from Yokohama to Seattle edition dated 16 September 1946, of the "SIR" PENT, the published on ship news letters of the S.S. MARINE SERPENT, a troop transport ship commissioned on 21 September 1945. After WWII, veterans of the Pacific campaign were transported to the United States aboard the S.S. Marine Serpent.
This is the SOUVENIR EDITION Daddy's Back !!!!
This is a 10-page edition and I have chosen 4-pages to post here and will try to describe the pages not shown.
Page 1: (shown) "SIR" PENT title page.
Page 2: title: HOME AGAIN !!!! also a article titled, "MEN OF THE ARMED FORCES" a salute and expression on honor to welcome them through the Seattle Port of Embarkation, by Col. Fenton S. Jacobs, Commanding Officer. He states our welcome will be one of deeds not words. A grateful America welcomes you back home.
Sports:
In the National League, St. Louis took two from the Giants, 3-0 and 7-4. Brooklyn split with Chicago losing the first game 4-3 and shutting out the Cubs in a five inning nightcap. Boston defeated Cincinnati twice, 2-1 and 6-1. No other major league scores were available.
Serpent Docks at Seattle Tomorrow Tuesday 17, September at approximately 1700 "GI" time. Ten days and 4300 miles ago, we had our first look at the ship as we carried our barracks bags up her gangplank and out of Japan. Since that time the "Marine Serpent" has brought us to the shores of another nation on the opposite side of the world's widest ocean.
The sailing is over, but a lot of men will remember the Voyage of the Serpent".
Page 3: PERSONALITIES: a little history on Capt. John E. Jenssen, Major John F. Rogers, Troop Commander & Lt. Col. A.F. Miller Transportation Commander.
Also on this page is the official passenger list for our voyage list 3157 total passengers consisting 16 officers, 3139 enlisted men, one merchant marine and one Red Cross Field Director.
Page 4: Fact About Disposition Center. Services available at the Seattle Port of Embarkation.
Page 5: Chaplains Corner welcoming them home and encouraging them to not lose track of the friendships they have made during their time of service.
Also a message from the Transport Commander Lt. Col. A.F. Miller thanking them for being one of the best and most cooperative loads of soldiers we have ever hauled homeward.
Page 6: (shown) BACK HOME
Page 7: (shown) The Voyage of The Serpent chart of noon position from daily report.
Also on this page is a list of the "SIR"PENT STAFF.
Page 8: The Last Laugh, (5) cartoons
Page 9: (shown) S.S. MARINE SERPENT drawing, staff and facts & figures of the ship.
Page 10: International Date Line Certificate stating their passing on the 12th day of September 1946.