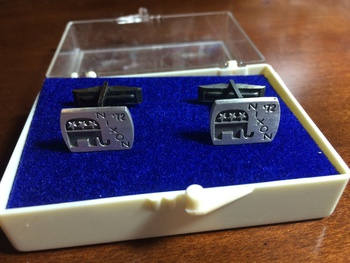 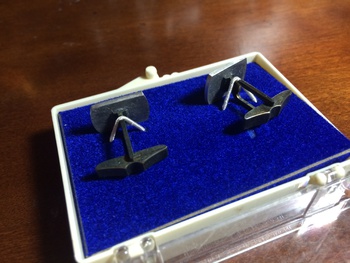 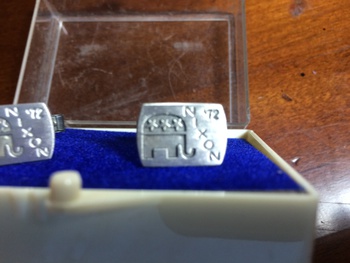 It finally happened. I was browsing on eBay and I came across a pair of cufflinks that I decided I MUST own. It is not a want or the First World Problem of deciding between the Gold iPhone 6 Plus or the Space Gray 6 Plus. This is a matter of national security. The Walking Dead zombie apocalypse was about to bring terror to the citizens of the woodsy areas of Atlanta if I did not win these cufflinks. Dogs and cats living together. MASS HYSTERIA!

So I placed an obscene bid. A bid so obscene that if the seller saw it, they would have enlisted their friends and family to keep bidding just to earn a bigger sale.

Fortunately, unlike the staff of the old Ultimate Bet poker site, my maximum bid was concealed and confidential.

I won this captivating pair of cufflinks for a mere $50 plus shipping. I literally felt like I was given a $300 Christmas gift (yeah, my max bid was right about there).

I just got them in the mail today. 1972 Nixon Campaign cufflinks. No, these were not owned or worn by our greatest President. They are simply campaign swag from the trail. The biggest landslide victory of our time. I wasn't around yet, unfortunately. Not born until 5 years later, but my youth included massive amounts of Alex P. Keaton observing, studying, and pure idolization. Yes, I had 8x10's of Nixon and Reagan in my bedroom as a kid. I wore a tie to school even though it wasn't required.

Yes, I am now a 37 year old banker that collects cufflinks. Was there ever any doubt that my life of dorkiness would eventually lead me to posting Nixon cufflinks from 1972 on an internet message board? No doubt in my mind. Thank God Al Gore invented the internet, or I would just be admiring my cufflinks in the privacy of my four post bed.

Anywho, thank you for reading. I am wearing these to work tomorrow. Yes, it may be politically incorrect, but so are those hideous Ugg boots that people wear. So sue me. :)

A Beautiful Pair Of Antique Victori...
$52

A Beautiful Pair Of Antique Victori...
$52
See all