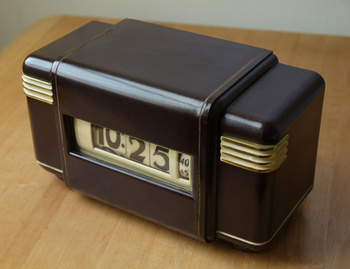 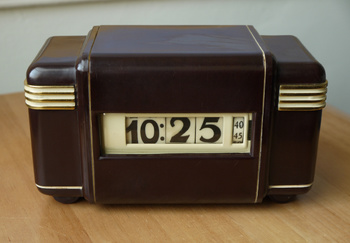 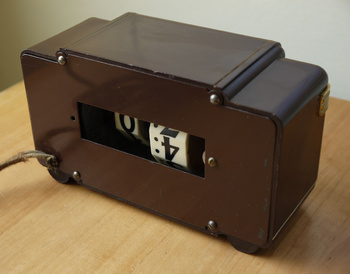 The Bakelite cased ‘Empress’ was introduced by Lawson Time, Inc. ca. 1937 as a less expensive alternative to their wood and metal cased clocks. This example has the old style numerals, plain ivory aperture plate, and early Hansen 'Synchron' motor typical of the company's 1935-1938 production. It also features brass trim pieces and ivory colored accents which were eliminated when the clock was reintroduced in the 1950s as the "Americana." The Americana was offered in “seven glorious colors,” including "Golden Ivory, Jungle Mahogany, Gleaming Walnut, Canary Yellow, Pacific Blue, Jade Green, and Mellow Burgundy." Walnut seems to have been the most common.

For more information about Lawson clocks, check out Decopix.com: http://www.decopix.com/the_lawson_clock_story/