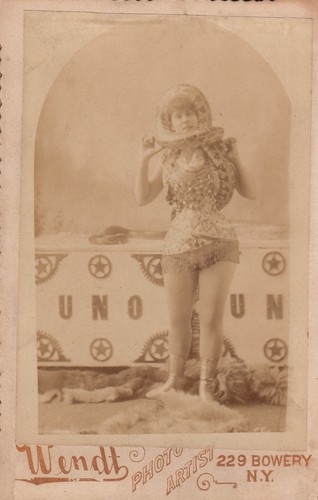 Frank Wendt has always been unfairly placed in the shadow of Sideshow Freak photographer Charles Eisenmann, his mentor. Wendt took over the Eisenmann studio on the Bowery in 1893 and ran it for five years before moving it to New Jersey. He continued making pictures there for a number of years, some quite extraordinary. In 1979, just as interest in collecting circus freak photos was rising (in part as interest in Diane Arbus was rising as well) a book on Eisenmann was published which dismissed Wendt's work as "perfunctory" and that the production of those years has all but been "obliterated." Au contraire! As we are just learning, MANY exceptional images remain. The photos here are certainly not obliterated.

Wendt specialized in the unusual. He shot all manner of performers, not just the strange. In fact, some of his most beautiful work is normal looking actors and child performers, who would use his cabinet card photographs as trade cards, mementos and such. Often the performers autographed the cards on the reverse, personalizing them to fans and the freaked. In the case of the carnival performers, vital statistics were often provided though frequently exaggerated. In fact, Wendt would take his pictures to emphasize the particular trait or deformity being marketed. As traveling shows passed through New York and New Jersey, they would stop to replenish their stock. Sometimes Wendt would republish Eisenmann's work on his own cards, but frequently a new photo was taken, and the same performers often appear in later pictures, with different imprints or logos on the cards. More information on the photographer is available at the WONDROUS WORLD OF WENDT site which posts an image weekly.
Group of Frank Wendt Photographs circa 1890 Collection Jim Linderman