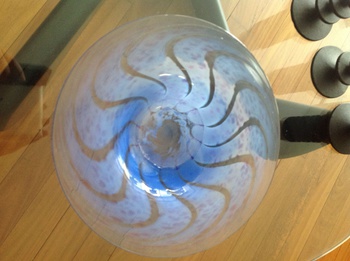 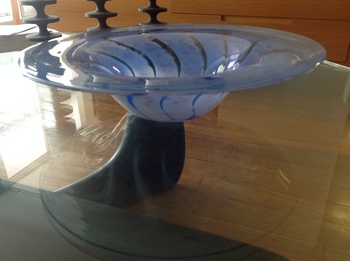 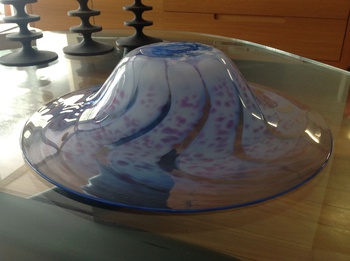 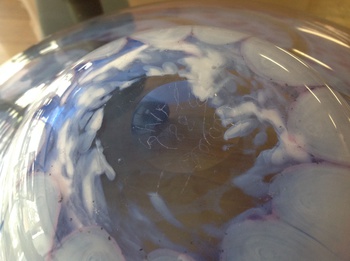 And now for something different!

A first for me at least : South African Studio Glass!

Found this 12" bowl down at Surrey Hills this morning here in Sydney Australia.

At first I though it must have been a piece of Australian studio glass. But at home I was able to make out a signature and date: Shirley Cloete - 88.

Shirley began her career as a glass artist only in her early forties but became the foremosy and for many years the only exponent in this field in South Africa.

She was born on the farm Glendower outside Johannesburg to Colin Bain Marais farmer and member of the South Africa Parliament and his wife Dinky. Dinky was the daughter of Sir Thomas Cullinan owner of the Premier mine outside Pretoria where the Cullinan diamond, the largest stone ever found was discovered.

In 1944 she married Sandy Bairnsfarther Cloete owner of the historic wine farm Alphen in the Constantia Valley. Until their divorce in 1961 she was mother and wife, a society hostess ...... but she joined the Black Sash, using this platform to protest against the injustices of apartheid.

She attended the Michaelis School of Fine Arts in Cape Town and studied design under Mary Hillhouse. She headed off to London in 1974 and was taught by Annette Meech in the technique of hand blown glass at the Glass House, Covent Garden, London.

Her mother had bought the farm Morgenster outside Cape Town at Somerset West. On returning to Somerset West she set up her own furnace, annealing oven and equipment. She has had many exhibitions since then in South Africa, three in London and one in Munich. She was a member of the British Artists in Glass and the Glass Art Society in America.

She had a cottage at Danger Point and dived there.

Shirley has pieces of her glass in the Dusseldorf Museum, Germany, Broadfield Glass Museum, England and the Talana Glass Museum, Dundee, South Africa.

She pioneered the Studio glass movement in South Africa.

Shirley sold the Morgenster Farm and vineyards in 1992 but continued to live there until her death there in 2010, creating in her chosen medium of glass in an extended studio which had once been the coach house.