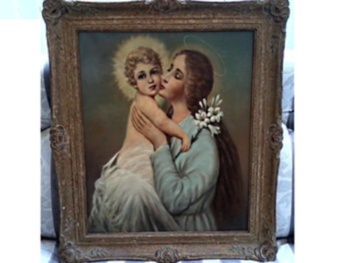 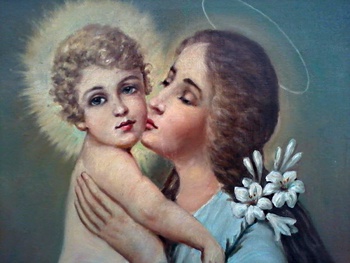 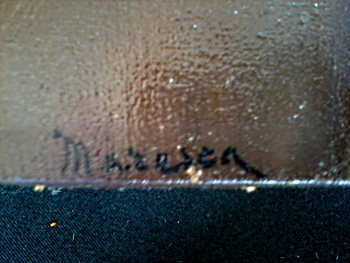 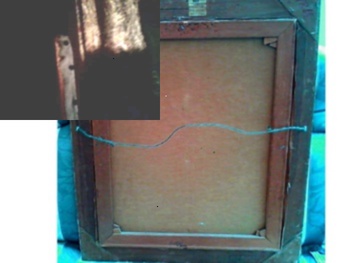 My "Madonna and Child" painting seemed appropriate to repost along with my seasons greetings. Merry Christmas everyone and a Happy New Year full of great finds and treasures galore !

I guess I caught the religious art bug from ho2cultcha because this was the first thing that caught my eye when I went back to the picture section at Volunteer's of America this morning. The 20" x 24" Madonna and Child oil on canvas was leaning against the wall with a bunch of other prints and pictures. It's rather crudely mount in the beautiful frame. Someone just slammed a couple of brads through the stretcher and into the back of the frame. At first I thought the painting had been cut down to fit the frame. It's tacked (not stapled "old"?) to the stretcher and the canvas edges are painted and kind of ragged. I didn't see a signature until I removed the frame so I figured the canvas was original and not cut. The signature was in the bottom right corner just out of view and covered by the frame. There is a tag on the top of the frame that says "DECE" No. 236 Kleur "LG" Meter 20 x 24 . The bottom has "Madonna" written in pencil on the wood. So the frame and canvas seem to have always been together and appear European in origin. As for the artist signature it's anyone's guess... Maresca or something like that. The canvas back and wood has darkened with age but I really don't know how old it could be. The painting is clear and bright with a few scrapes and a scuff and dent near the Madonna's chin. The execution reminds me more of the holy cards I received as a child than a great masterpiece but still quite nice. The frame tag is in Dutch "kleur" is "color" so that's a clue were it came from. The colors are very nice and it does grow on you after a while halos and all. -Mike-