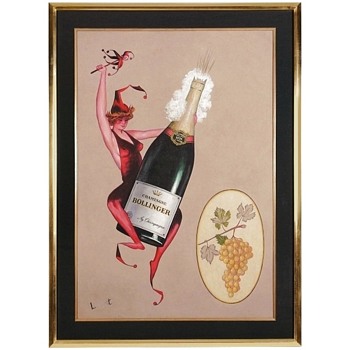 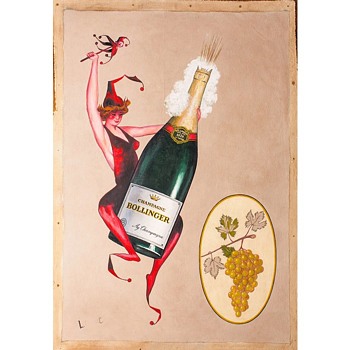 A champagne toast to the New Year!

I believe most everyone is getting ready to bring in 2015 and champagne is typically the drink of choice.

Aside from being one of the world’s most recognized brands, Bollinger is also famous as superspy James Bond’s (007) champagne of choice since first appearing in Ian Fleming’s 1956 novel, Diamonds are Forever.

This is a large, visually striking 30” x 45” canvas painted in deep, rich colors. The bottle is amazingly realistic and the woman dressed in that seductive red jester outfit straddling an erupting bottle is ... well ... hmmm ... what else can I say?!

Although signed, I haven’t yet found information about the artist but suspect he (or she) was employed by an advertising agency much in the same manner that John Gilroy (Guinness artist extraordinaire) worked for S.H. Benson. I contacted the Bollinger folks in France to learn more. Their response was fast and this captivating study surprised them as well. A conservator that cleaned the image agreed with my opinion that it could be as early as the 1920s. Anyhow, I hope to learn more.

(Please note ... for reasons most everyone understands when posting collectables here on CW, I modified this rare image by cropping details, removing most of the artist’s signature, and so forth.)

Since posting this canvas a year (or so) ago, I commissioned a custom gold frame with a dark green silk over-matt. It turned out better than I expected!

Henry Fuseli The Nightmare Giclee A...
$11