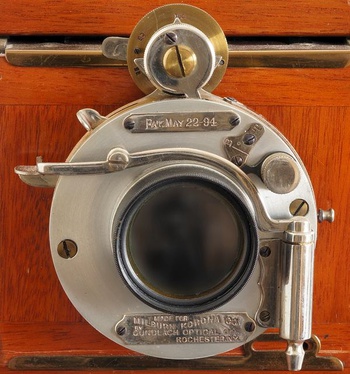 There was a time when shutters, something we take for granted today, were mounted outside of the camera body. Some were practically works of art. Although majority of early shutters were made of brass, a rare few had bodies of milled aluminum.

In the early 1800s, aluminum was quite expensive and a status symbol for the wealthy. Yet by the later 1880s, when an inexpensive method was invented to extract aluminum, photographic equipment makers looked at using the lightweight metal as a substitute for heavier brass. For instance, in the early 1900s aluminum was prominent in many of George Eastman’s popular roll film camera bodies.

Shown here is one of the few pre-1900 shutters built with an aluminum body instead of stamped and soldered brass. While small brass parts are still used in the shutter, the lighter colored, rigid aluminum makes a very structurally solid body and is (IMO) attractive.

While best known for high quality optics, the Gundlach Optical Company also made brass shutters. This particular example is very unusual and I believe it was a special request by Gustav Milburn for his newly released “Korona Hand Camera.” Only the earliest of these pneumatic shutters, introduced in October 1894, have milled aluminum bodies with a maker’s badge noting it was “Made for the Milburn Korona Company by Gundlach Optical Co.” Interestingly, later models of this shutter design have brass bodies.

BTW ... the shutter works quite well after all these years!