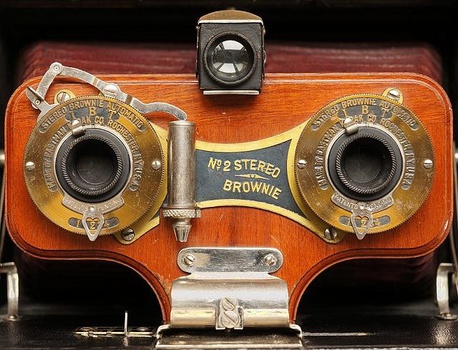 There was a time when shutters, something we take for granted today, were mounted outside of the camera body. Some were practically works of art. This stereo shutter for a specialized Kodak Brownie camera is another one of my favorites.

Most everyone is familiar with simple box form Brownie cameras made by Kodak. There were also some folding bellows styles and a rarely seen stereo model. To keep the overall cost as low as possible, the stereo shutter is actually two individual shutters mounted on a thin brass plate and interlinked to fire at the same time.

The stereo shutter is partially built into a nicely sculpted and finished wooden lens panel. This particular shutter is labeled “Brownie Automatic” (patents pending) and only available in 1905. It was renamed as the “Pocket Automatic” from 1906 until the end of the run in 1910.