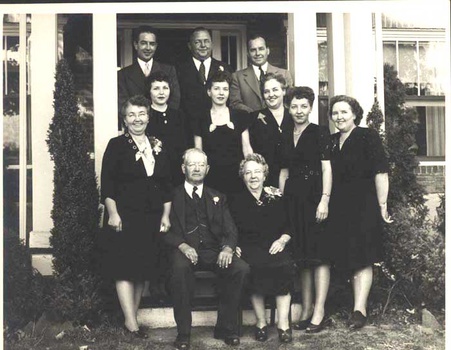 This is a photograph taken in 1946 of my paternal great grandparents on their 50th wedding anniversary with nine of their twelve children present.
Seated in front are my great grandfather and great grandmother. All six of their daughters are standing (my great aunts, except third from right is my grandmother). Three of the six sons are standing in the back. There are three sons not shown, one had died at the age of one year, one had died in 1943 at the age of 39 (three years prior to the photo), and the third missing one died in 1917 during a pneumonia epidemic. Both of my paternal great grandparents had immigrated from Quebec, Canada and were married in 1896 in Holyoke, Massachusetts. My great grandfather died in 1949, great grandmother died in 1965. Two of my great aunts pictured lived the longest, both dying in 1998 (age 90 and age 98).