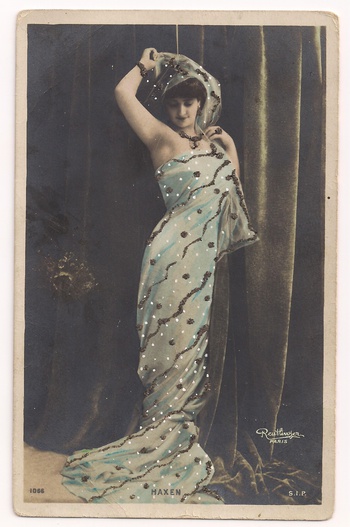 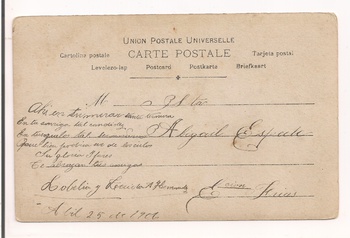 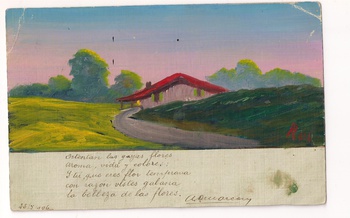 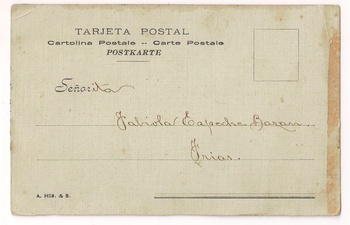 I found Fabiola Espeche on iternet really incredible https://familysearch.org/ark:/61903/1:1:XNHD-CZ5, so now I know whose were her parents (Jesus Maria Espeche and Abigail Basán) and that in 1906 she was 20 year old, when Dalmiro was in love with her http://www.collectorsweekly.com/stories/145117-embroidered-postcards. The first postcard here was sent to Fabiola Espeche sister that had the same name of her mother Abigail and was sent by Lobelia and Lucila Hernandez the 25 April 1905. Bothe Lobelia and Lucía were friends of Abigail since it can be read
Hay en tu mirar tanta ternura (there is so much tenderness in your eyes)
En tu sonrisa tal candidez (your smile is so kind)
En tus hoyouelos tanta hermosura (in your dimples there is so much beatifulness)
Que bien podría ser de los cielos ( that it may be celestial)
Su gloria y paz (its glory and peace)
Te abrazan tus amigas (embrace you your friends)
There are several errors of ortography so seams these Hernandez girls has gone only to elementary school, as it was common in that years in such a place. The postcard is a woman with glitter and color, very rare, it is signed Reutlinger Paris, it was a famous atelier, I pasted some information from http://wonderings.net/vintage-postcards/atelier-reutlinger/ since it describes well the features of mine postcard. The Reutlinger Photography Studio was opened in Paris in 1850 and took photos of the rich and famous until 1937. The studio was founded by Charles Reutlinger, of German descent. There is a charming description of a visit to the studio in an 1867 edition of The British Journal of Photography. The studio passed on to Charles’ brother Emile in 1880, who ran the studio until 1890. In 1883, Emile’s son Léopold (b. March 17, 1863) came to Paris from Callao, Peru, where he grew up. It was Léopold, who took over in 1890, that developed the postcard business that most interests me. Léopold “introduced a very distinctive style of merging photographic images with art nouveau fantasy overlays. He added to that process exceptionally well-done hand tinting. The Reutlinger Studio became known for their unusual art nouveau styles of postcard designs, especially for portraits of actresses. These postcards were not cheaply produced, nor were they cheaply sold. This part of his business was very successful and sought-after, as thousands of his art nouveau postcards were produced.” (http://e-vint.com/e-reutlinger.html). One almost identica but without glitter on the (https://www.etsy.com/es/listing/163395630/actriz-de-teatro-codillo-por-reutlinger) web .
The other one is a rural sightsee and was handpainted over the impressed. It is dated 25 July 1906, there is also a loving poem and a signature that can not translate. Seem to me that this Fabiola Espeche broke several hearts because the signature is not from Dalmiro Tolosa. This poem is more carefully written.
Ostentan las flores joyas (Flowers bear jewels)
Aroma, vida y colores; (flavors, life and colors)
Y tu que eres flor temprana (and you that are an early flower)
Con razón vistes galana (dress with wright and gallantry)
La belleza de las flores. (the beauty of flowers).
Well thanks Pocho for your present, I enjoy it very much this small touch with the lives of Espeche sisters.