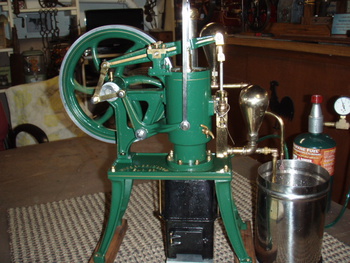 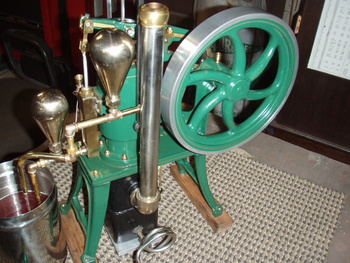 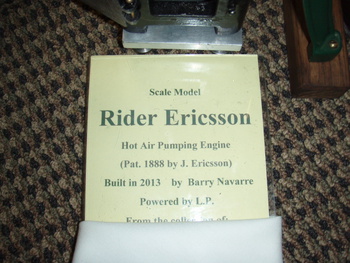 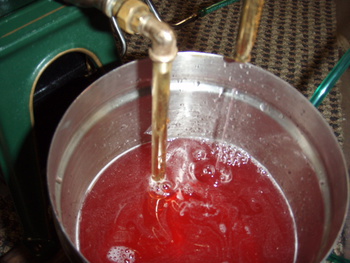 This is a working model of a Ryder Ericsson Pumping Engine Powered by a hot air engine (as were the originals).
It differs from the last hot air engine that I displayed in that the Displacer piston is directly in line with the power piston. In fact, the displacer goes directly through the power piston and travels at 45 deg. to the power piston. This makes for an interesting amount of movement as these piston go up and down and the flywheel cranks around. The model stands about 15 in. tall. You can see the pump doing it's job by pumping the water in the container (red color comes from the RV antifreeze that I add to the water during winter shows)
The full sized Ryder Ericsson hot air pumps were used for many types of pumping operations. The one That I find most interesting is that they were used by the steam railroads on remote areas where water was only available from wells, such as in the plain states. The water was needed to replenish the water for the steam boiler when low, and pumps like this were set up over a well so the engineers could fill the engines with needed water. The engine tender would use wood that was chopped and stacked alongside the pump by the previous train crew, to make the fire in the firebox, to operate the pump.
While this was going on, the rest of the crew would cut dead wood and stack it for the next steam train to use when it arrived and needed to pump water for their boilers. by doing it this way, the trains could keep up with their schedules and not run late.