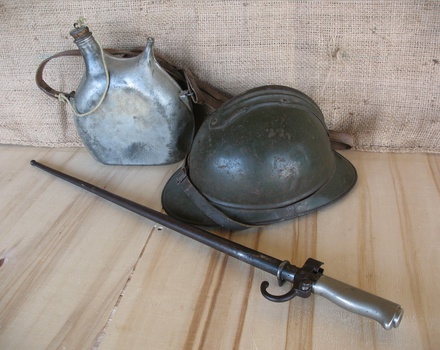 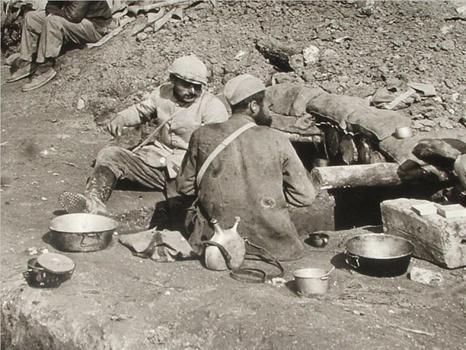 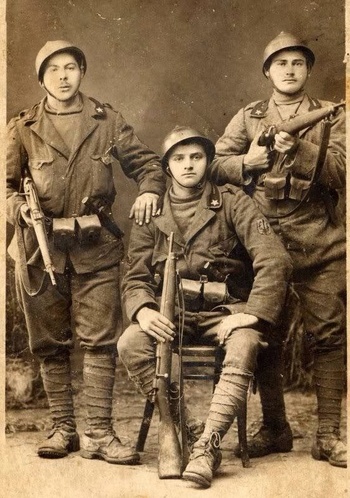 Standard shrapnel helmet adopted by the French Army from July 1915, named after its designer General August Louis Adrian , the Italian army also adopted the Adrian style helmet, the first batches were supplied by the French, then later the Italians mfg their own version.

It was the first standard helmet of the French Army and was designed when millions of French troops were engaged in trench warfare, and head wounds from the falling shrapnel generated by the new technique of indirect fire became a frequent cause of battlefield casualties. Introduced in 1915, it was the first modern steel helmet.

The Mle 1886 Lebel rifle was issued with a long needle-like quadrangular épée bayonet, with a length of 52 cm. (20 in.). With its X-shaped cross section, the épée bayonet was optimized for thrusting, designed to readily penetrate thick clothing and leather. The bayonet was dubbed Rosalie by French soldiers who were issued it during World War I.

The double-sized 2-liter canteen was originally reserved for issue to troops in Africa, but the difficulty of supplying clean water to men in close combat was considerable and it prompted the introduction of the double-sized water bottle to all troops in the summer of 1915. Often two bidons were worn; in the assault, one bottle typically contained wine (pinard) mixed with water, the other coffee and tafia spirit.