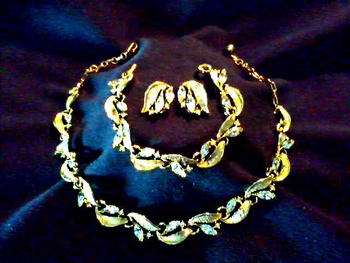 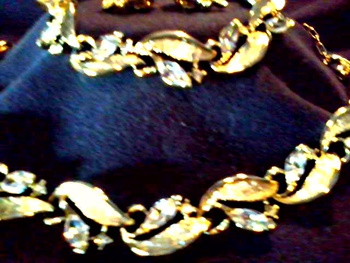 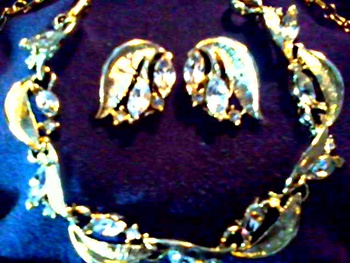 This wonderful full parure set came from my good friends at Salvation army this morning. It didn't have it's original case but it was donated all in one box. It's in absolutely perfect condition all marked and appears like new. Amazing marquis cut rhinestones in a brillant gold-tone leaf design setting. The set comprises a necklace, a bracelet and a set of clip-on earrings. This is the first complete matching set I found intact. Others I have put together myself but this is really something. -Mike-

D. Lisner and Company was founded in New York City in 1900 and closed in 1985. The Lisner jewelry mark was first used in 1935, a mark of D. Lisner & Co in New York. They used their mark in block print and script, and it is the mark of Lisner & Richelieu. The quality of the jewelry they made ranged from very good to above average. They made much of their jewelry in the 1950's. "LISNER" in block was the mark first used in 1935. "Lisner" in script was first used in 1938, and in 1959 the mark used most was "Lisner" in block-type letters with a long L. These marks may appear on jewelry made by Lisner over a period of 55 plus years, and it is not possible to date an item by the mark alone. Molds and findings were kept and stamping dies were rarely disposed of and were used again at later dates.

Several pieces of matching jewelry that are designed to be worn together, though fewer than a full set or parure; dates from the the second half of the 16th century, and traditionally, when a parure involved six or seven pieces, a demi-parure was a three-piece suite of (usually) a necklace, earrings and a brooch or bracelet; however, in the early 20th century, the term "parure" began to refer to just a trio of coordinating items, and a demi-parure was similarly downscaled to refer to any two matching pieces