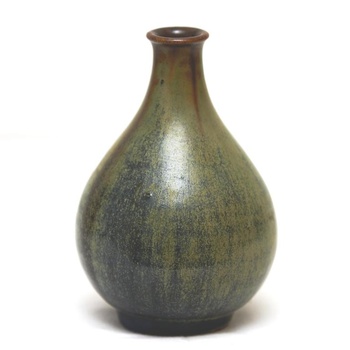 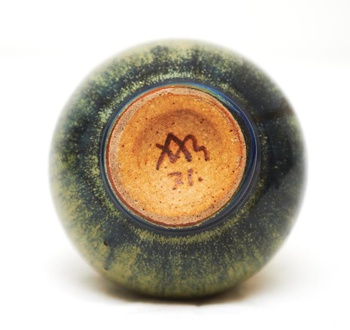 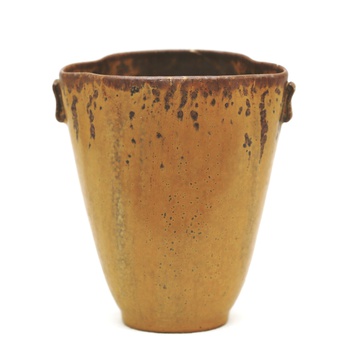 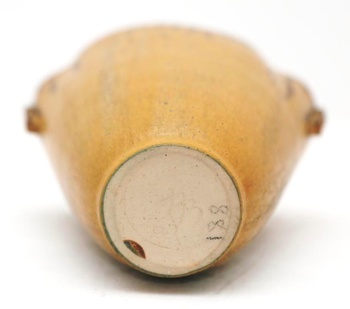 Two vases designed by Arne Bang (1901-1983). Trained at the Royal Academy of Arts as a sculptor, Arne Bang started his own ceramics studio with Carl Halier (known also from Royal Copenhagen) in 1926 and from 1929 he was also affiliated with Holmegaard Glassworks where his older brother Jacob Bang was the artistic director. There he started experimenting with stoneware – his mission was to produce high-quality stoneware affordable for 'ordinary' people, not expensive unique works. He succeeded and it is said that 10,000 pieces were produced per year at some point in the 1930's!

Like his brother he was very prolific and also made sculptures and reliefs from the 1940's. At the moment his pottery is very popular and fetches high prices at auctions (it not very difficult to come by, though), probably because of the very simple, almost timeless style which fits modern taste. The most well-known kind of pottery from his hand is monochrome bowls, vases and dishes with matte glaze and shaped with vertical grooves (see kunstform's post: http://www.collectorsweekly.com/stories/113846-arne-bang-vases).

The elegant pear-shaped vase, however, seems to be inspired by Asian pottery. It is listed for the first time in the 1932 Holmegaard stoneware catalogue – the price then was DKK 4 (75 cents) – and it was produced with several types of glaze; here a beautiful green/blue hare's fur glaze (click to enlarge picture). The other vase is also quite typical for Arne Bang with its simple shape and little ‘ears’. I am not sure of the date, except that it is probably a little later than the other one.