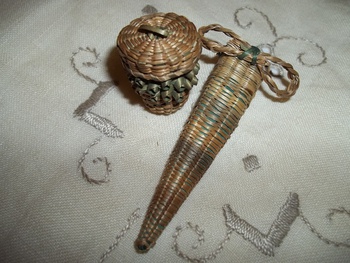 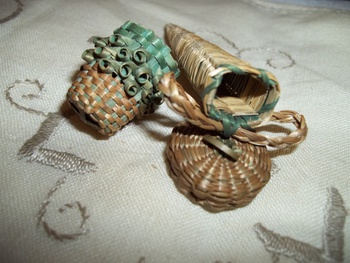 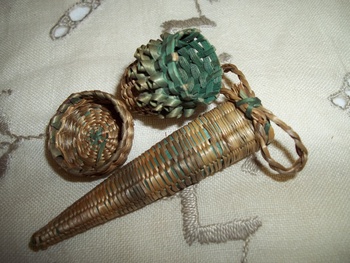 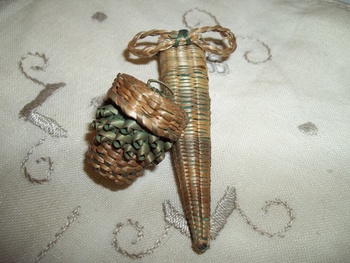 I purchased these two baskets and received them today, and I am very happy to add them to my Native American basketry collection. They are a Thimble Basket and a Scissors Basket, made from splints taken from the Ash Tree and Sweet Grass collected by the artist. These were made around 1920-1930. These amazing miniatures are indicative of Master Artist Theresa Camilla Lyon Sockalexis, (Penobscot) who wove miniature sewing baskets. Sewing baskets were very popular with the women of the times (1880-1935) and Native American women would make sewing baskets to sell at the train station and other places that had alot of tourists. Some would just sell the large sewing basket alone, but the tourist women would also have other options to go with their large sewing basket. Those were the small Button basket with a lid, the Thimble holder basket, a Needle holder basket and a Scissors holder basket. They would sell those to go with the large sewing basket, or they could just buy the small baskets. The Native American women would take colorful ribbons and tie the ribbons to a hollow ivory circle. Then they would tie in the miniature baskets and sell them as a Chatelaine. The tourists would snap them up to take back home and show them to their friends at their sewing circles. It is hard to find sewing baskets with all the little baskets inside them still, and even harder to find baskets that are not damaged. I have two sewing baskets with all the little sewing baskets inside and intact but it took years of active searching to find them, and the color of the basket still vivid and with no damage. One was made around 1890 and the other one was made later, around 1920 and I am happy to have both of them because they show how the style changed from the older basket to the newer one. And now I have found this beautiful miniature Thimble basket and the Scissors basket to add to my Native American sewing basket collection. And even better than that, there is a good chance that these two were woven by Theresa Camilla Lyon Sockalexis. She used the Curly in her weaving of Button Baskets, Sewing Baskets and also in the tiny Thimble Basket, as shown in the picture. The Thimble Basket is one inch by half inch round, and the Scissors Basket is three and a half inches in length by a half inch (at the top of the basket). These two were woven at the same time and were made to go together for sale, and the coloring is the same for both. They are a wonderful Blue-Green and the Thimble has the tiny and amazing curly weave. It is very hard to weave miniatures and it must have taken a very deft and stable hand to weave this small, it kinda blows my mind that it could even be done without breaking the splint. There are only a few weavers today that make true miniature baskets, Ganessa Frey is one. And although I cannot say for sure that it was Theresa Camilla Lyon Sockalexis that wove these two beauties, I can say they look very much like her work, the color of both the baskets is one that she used a lot, and these two miniature baskets are very old. Enjoy the pics :)