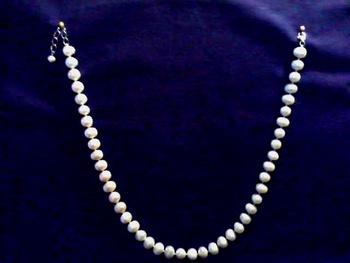 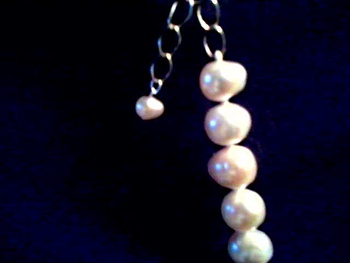 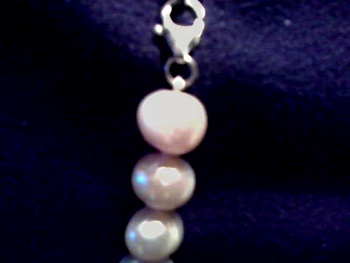 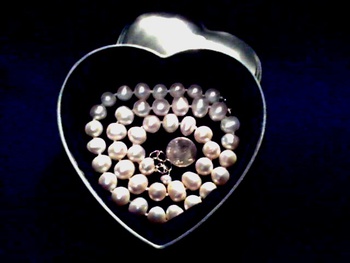 This was my Salvation Army find for today. My friend handed them to me as soon as I walked in the door. An 18" strand of double knotted rather large Baroque pearls. Not sure of the millimeter but some are close t0 dime size (see pic 4). They are fairly irregular, lumpy and some have an oval barrel shape. Incredible lustre too. So, first question. Are they real ? The answer is most likely yes, but I couldn't tell her what the quality was. Are they Freshwater, Saltwater, Cultured, Natural, South Sea, Tahitian, Japanese, etc. They passed the tests. The tooth test (I know yuck ) but I did. Then the rub test to see if they created powder from the friction by rubbing two together (very carefully). Yes to that as well. Heavy and cool to the touch. The clasp is marked .925 but that's the only mark. It's on the lever of the clasp almost hidden and super tiny. So inexpensive freshwater or more pricey saltwater ??... I really don't know. I like the silver clasp better than a gold one but gold could indicate a more expensive strand. Add diamonds and then it would a no brainer. So it's a bit of a mystery, but they are very nice. There was also an 18" necklace of Mother of Pearl beads, which are bits of the shell that are formed into beads. So some are dull and others have the pearly sheen with bits of color. I picked those up too. Not nearly as nice as these, but still attractive. -Mike-