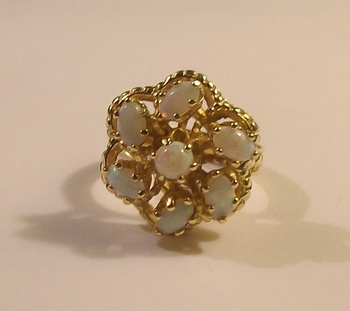 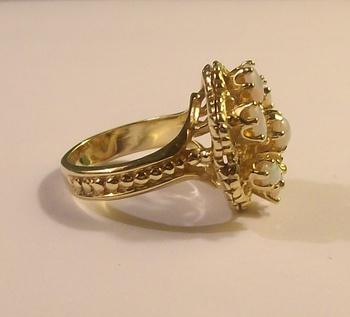 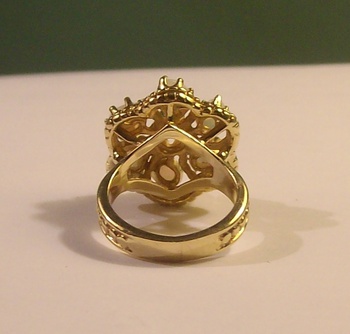 This 14k ring came up for auction several years ago and upon the pre inspection, I had to have this ring. When the bidding started, I could not believe that the only other bidder I had against me dropped out at less than $40. The ring weighs almost 16 grams and the opals are absolutely stunning & flawless. The gold "melt value" at the time was over $250. Not that I would ever contemplate scrapping this ring. It is a real beauty. This was one that I felt real good adding to the collection. I have a little over 300 rings of both 10k, 14k & 18k. I had the opportunity to bid on a large lot of vintage wedding/engagement sets. Of the roughly 150 rings (75 or so sets) again at a different auction I and only two other bidders had interest in this lot. None of the diamonds in the engagement portion of each set is huge (each main stone of most were about 7-16 points" A few were larger and a very few were smaller. But out of the 150 mostly diamond rings, only one main diamond had a flaw. It was a very tiny chip which could not be seen unless it was under 20X magnification. I love the old style rings and most of these are circa 1950's. But these "are not" costume jewelry, rather they are mostly (90+%) 14k. I have a few that are 18k. It was strange that not a one of them were lower than 14k. Some yellow gold, some white gold. Some are two toned. All are very attractive.