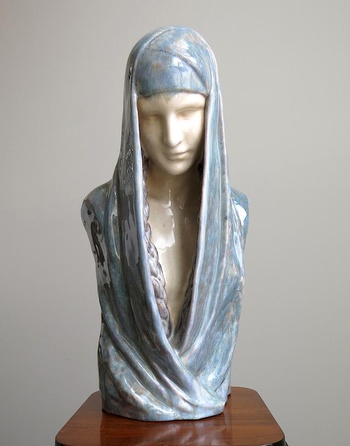 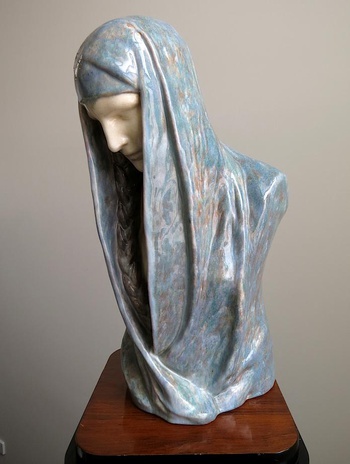 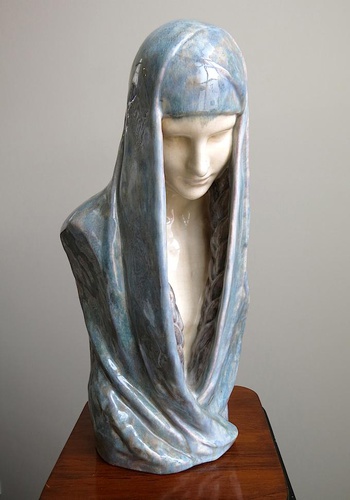 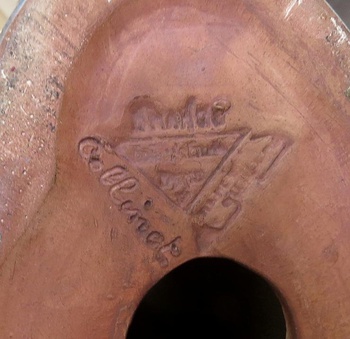 Symbolist bust sculpted by Claire Jeanne Roberte Colinet (1880-1950) that was edited by Editions Etling (Paris; 1909-1930) and rendered in glazed stoneware by Marcel Guillard (1896-1932). The original of this bust was rendered in bronze by Colinet, who then allowed Guillard and Editions Etling to produce versions in ceramic with various glaze and clay types for sale in the high-end Etling gallery in Paris. The underside carries the stylized Marcel Guillard and Editions Etling, Paris stamp, as well as being hand inscribed Colinet. This particular bust, of which two are currently known by this writer, has a nice high gloss robin egg blue glaze that has been applied in such a manner that is allows some of the red/ocher clay substrate underneath to show through. This produces a nice mottled effect in the bust’s garb, while the skin and braided hair are rendered in deep cream and brown glaze. Dimensions: ~15.5" x 8" x 6".

Marcel Guillard (1896-1932). An enameller and ceramist. He worked with André Fau, Le Jan, Delabassé, Wuillemier and Giraud-Rivière for the firm Editions Etling, which participated in the Exhibition of Decorative and Industrial Arts in Paris in 1925.

Editions Etling Paris -- In 1909 Edmond Laurent Etling founded a firm under his own name. He opened a shop in Paris on the 'Rue de Paradis nr. 29. In this shop one could buy the most exclusive art objects of that time, mainly made of bronze, ceramics or glass. Etling represented world famous sculptors and artists like Dimitri Chiparus, A. Godard, Claire-Jean Roberte Colinet, Lucille Sevin and her husband Jean Theodore Delabassé, Gazan, Georges Béal, Maurice Guiraud-Rivière and Marcel Guillard. These artisans were all leading members of the French modern art of that time and by creating ideal circumstances for them, Etling played a significant role in the style, which later became known as art deco.

Paris was the heart of the modern art during the period between the First and Second World war. Paris worked as a kind of magnet on the many different famous and less famous artists, as still is the case nowadays. Eventually the exposition "l'Exposition Internationale des Arts Decoratifs et Industriels Modernes" from 1925 gave the art deco style it's name: Art Déco. Off course Etling was a candidate on this exposition and enjoyed much deserved interest.

Marcel Guillard fulfilled a special role in the Etling business. His Parisian atelier was well known for it's outstanding glass and ceramics, and many of the earlier named artisans used his knowledge and workplace to produce their art objects (all the shown images were made there). The atelier-mark of Guillard was put on the objects and the Etling mark ("Editions Etling Paris") as well and the artists signature. The name of Marcel Guillard as artist is also connected to the another famous editor in Paris, named "Robj".

The firm of Edmond Laurent Etling stopped during the Second World War and sadly enough mister Etling, as a Jew, was deported and died in a German concentration camp. This was also the end of the art deco period, which found it's ending at the American "World's Fair" in New York (1940).