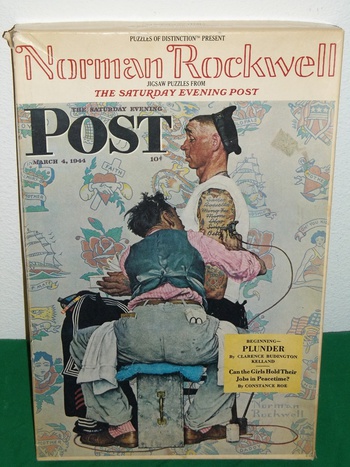 Tattoo Artist, a Norman Rockwell painting, appeared on the cover of The Saturday Evening Post published March 4, 1944. This is yet another timeless favorite of Rockwell collectors, a classic for all the ages.
Alternate titles for this painting are Only Skin Deep and The Tattoist.
This painting was Rockwell's second cover for The Post in 1944. In 1944, there were nine Norman Rockwell Saturday Evening Post covers published. This painting was also Rockwell's 219th overall of 322 total pictures featured on the cover of The Post. Rockwell's career with the Post spanned 47 years, from his first cover illustration, Boy With Baby Carriage in 1916 to his last, Portrait of John F. Kennedy, in 1963.
I have seen pristine original copies of this magazine cover sell for big bucks on eBay. And to think it only cost ten cents originally! And it was mint condition then, too. The original oil on canvas painting, 43 x 33 inches or 109 x 84 cm, is currently part of the collection of the Brooklyn Museum.