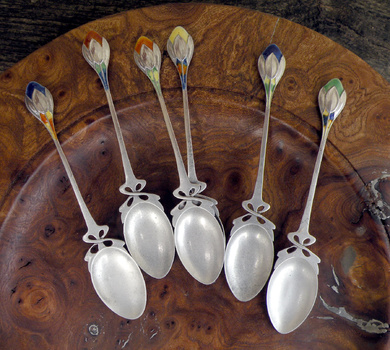 The set of teaspoons on the left is another of Knox's design triumphs. Although this pattern appeared at the beginning of the 1900s (1902) for this set, they were not officially named by Liberty's, the naming scheme having been abandoned in 1900 as it caused too much confusion. The finials resemble crocus flowers, hence the name and the Celtic bows where the stems join the bowl are an amazing design feature.
To the right is an enamelled coffee spoon of the 'later' crocus pattern but this actual spoon was assayed in 1953, the design (as I have since discovered) having been around for about 40 years.