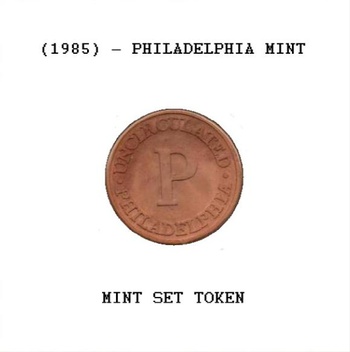 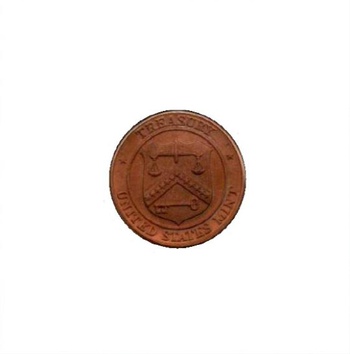 This is a bronze token from a 1985 U.S. Coins Mint Set. - In 1982, the U.S. Mint had discontinued the SB Anthony Dollar coin. No "official mint sets" were issued in 1982 or 1983 and when the mint resumed issuing mint sets in 1984, they inserted a mint token in place of the dollar coin. The 1984 to 1999 mint sets had these tokens, "D" for the Denver Mint coins, "P" for the Philadelphia Mint coins. These tokens were struck on the same blanks (or planchets) that were used to mint the one cent coins (copper plated zinc). The issuance in 2000 of the new Sacajawea Dollar coins eliminated the use of these tokens in official mint sets.
Although not dated, this particular token came from a 1985 set.
Obverse: Uncirculated / Philadelphia / Large "P" in center
Reverse: Official U.S. Treasury Seal emblem
Mint Condition / Diameter: 19mm / Content: Bronze / Mintage: unknown