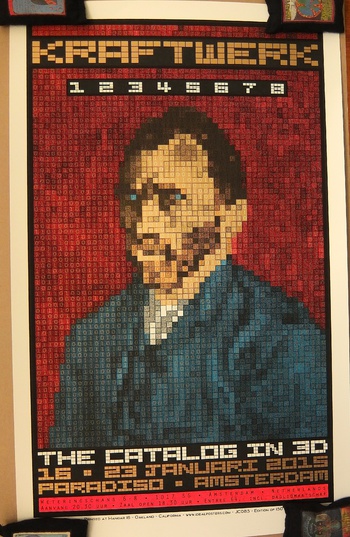 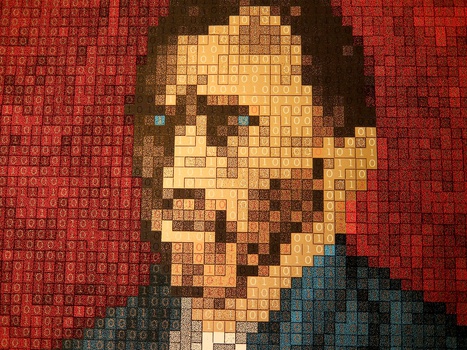 Another Chuck Sperry, this time for 8 shows by Kraftwerk at Paradiso in Amsterdam. Edition size is 150, dimensions are about 21 x 33. 4-color screenprint. I love the texture of each little box; it keeps the piece from feeling too digitally made or too hard edge. Here's what the artist has to say about it:

>>>
Kraftwerk is playing its entire album catalog in a series of concerts entitled “1 2 3 4 5 6 7 8 : The Catalog in 3D” on eight consecutive nights from January 16 to January 23, 2015 at the Paradiso, Amsterdam. I created a digitized and pixelated portrait of Dutch artist genius Vincent Van Gogh for Kraftwerk’s electronic concert series at Holland’s legendary Paradiso. If you look closely Van Gogh has been broken into a random sequence of binary code. Even though the subject is geometrically fragmented, his angst is still recognizable through his piercing blue eyes. I felt this pairing of art’s modernist genius with music’s modernist masters to be an evocative commentary on the world’s uneasy progress into the digital age.
<<<