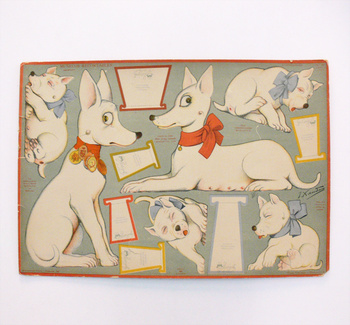 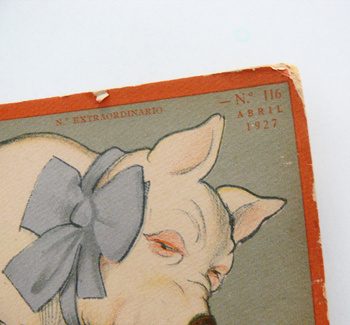 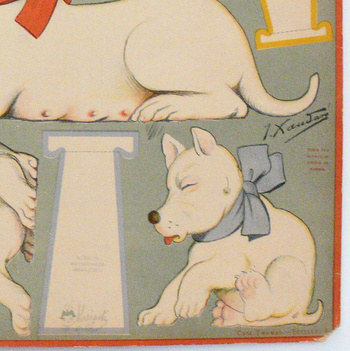 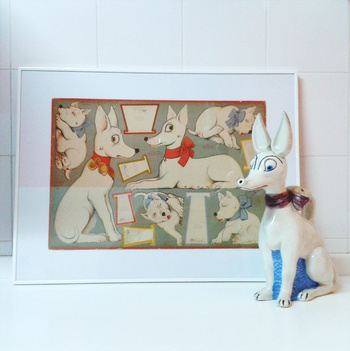 I guess all of you must already be familiar with the name of Joaquín Xaudaró and it's pet dog, as I've already talked about them here when sharing both the dog-shaped botijos and the book with Xaudaró's cartoons (please see links in the Comments section)

This time I'm sharing with you this paper doll sheet with Xaudaró's dog, its lady dog and their four puppies. We found it yesterday morning when checking some second hand bookstores at The Other City, from where we've just arrived after a two weeks stay.

The sheet holds the name of both the publishing company (Editorial Páez, 50 Ferraz street) and the printing company (casa Thomas, 3 Sevilla street), but there's no mention at all about in which city they were printed. My first guess is that both of them could be found in Madrid, as both Sevilla and Ferraz are well known Madrid streets. I've tried looking for simmilar street names in Barcelona, the traditional city of the Spanish publishing and printing industries, but no Ferraz street is found there - although Thomàs was a well known printer in Barcelona... my guess is that he had a press in Madrid too. Another option is that casa Thomàs wouldn't be the actual printer but the company that created the printing plates... they had wide expirience in doing that as they were the ones printing some of the best Art Nouveau posters printed in Barcelona. A later research made me learn that in the 1940s Editorial Páez was indeed in Madrid although at a different address. A change of address is natural as Ferraz street, now a luxurious street on the west side of the city with amazing views over a big park, the royal palace and the mountains (we should know well as a friend of us lived in one of the towers there... a 13th floor with the most jawdropping views), was really damaged during the Spanish Civil War.

On pic.4, the sheet is already framed. It's on the kitchen counter, by one of the botijos, although it will be hang on the opposite wall in the same kitchen, by the two dogs. Will take a pic of them as soon as it's hung.