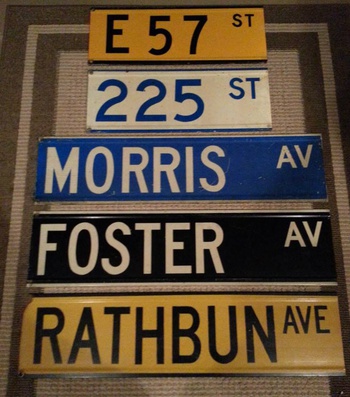 At one time, over 30 years ago, street signs throughout New York City were in several different colors. They were as some say "color-coded," and the intention was to indicate to a lost traveler of what borough he or she was located in.

Each color scheme for each borough was derived from the porcelain street signs that were previously used in the 5 boroughs. In my picture above, I have one street sign from each borough. From top to bottom...

"MORRIS AV" The Bronx. Total opposite of Queens' color scheme.

"Color-coded" street signs were manufactured and installed by New York City's Department of Traffic (now Department of Transportation) in the 1960s and 1970s. In the 1980s, mostly all of them were removed by the D.O.T., since it was in favor of the standard white on green street signs.