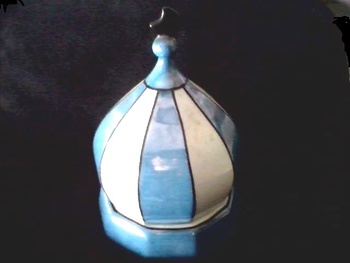 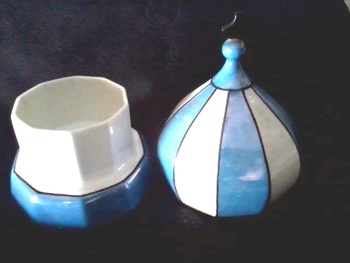 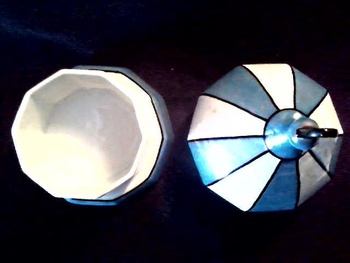 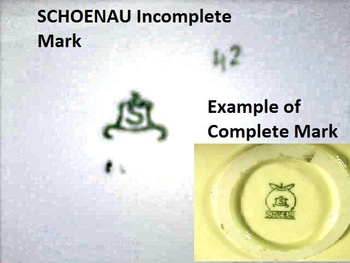 So today was half price day at Salvation and this had been in the case for over a week. Time to grab it ! It looks to be a blue and white luster ware powder or dresser box. It has an unusual onion dome lid with a black crescent moon finial. The inner container is a decagon shape just like the dome. The bottom has a partial green ink stamp mark with a green number "42" and the numbers 2352 stamped into the clay. A lot of the luster ware pieces are from Japan either Nippon or Noritake. However I think this one is German or Bavarian porcelain. The onion dome also makes me think of Russia. Not much to go on with just the "S" in the mark showing but if I saw a complete one I could match it to a maker. So far no luck. -Mike-

Note: Many thanks to "maryh1956" for researching this incomplete mark for me !

Now that I know what to look for here's more from a cup description that was on Rubylane's site :

The encircled "S" mark is associated with the Schoenau Bros, aka Schoenau Brothers, of Huttensteinach, Thuringia, Germany . Schoenau Bros was going through ownership changes during this period and another name for them during this time was Gebrüder Schoenau, Swaine & Co. According to sources this mark was registered at the Reichswarenzeichenregister (RWZR) as '#313 402' on April 15th, 1924 but was only used on tea sets before 1928". The company stopped manufacturing decorative china and switched to other porcelain components in the very late 20s to early 30s.