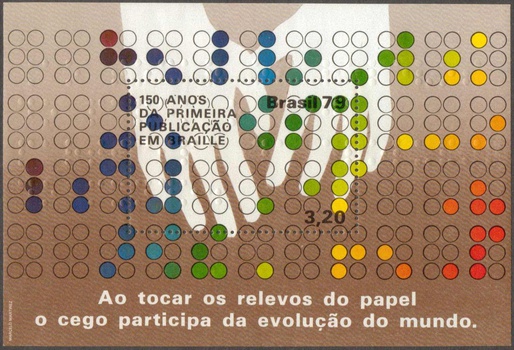 This is a souvenir sheet issued by Brazil to commemorate the 150th Anniversary of the first publication of Braille script. The sheet measures 5" wide by 3 3/8" high and contains a denominated stamp in the center.
The print is lithographed and the sheet is actually embossed with braille.
-- Scott #1650 / Denomination: (3,20) cruzados / Mint condition
- - - This souvenir sheet was issued on November 20, 1979
** Braille is a tactile writing system used by the blind and the visually impaired traditionally written with embossed paper. Braille is named after its creator, Frenchman Louis Braille, who lost his eyesight due to a childhood accident. In 1824, at the age of 15, Braille developed his code for the French alphabet as an improvement on night writing. He published his system, which subsequently included musical notation, in 1829. The second revision, published in 1837, was the first digital (binary) form of writing.