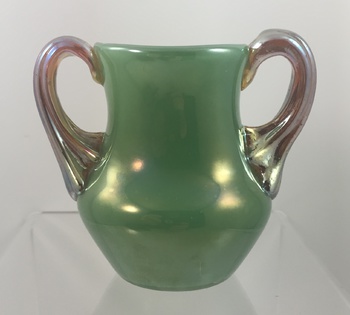 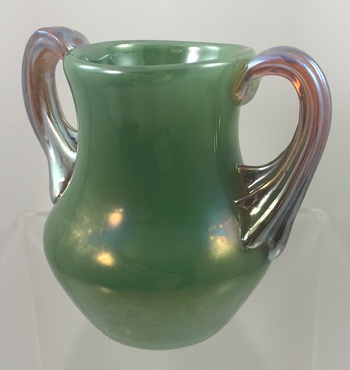 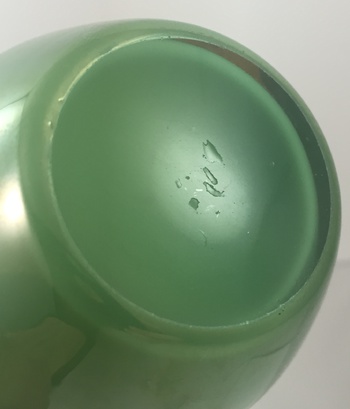 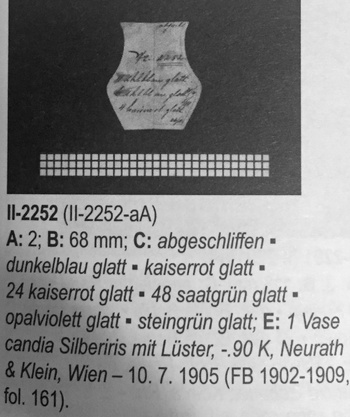 Thanks to Tony A. for offering me a chance to acquire this sweet little Ausführung 129 miniature (2.67 inches tall). I try not to post items that have been posted here before, unless I have something to add. I certainly can't improve upon Tony's excellent photography, but I can add a couple of points of interest.

Ausführung 129 makes its first appearance in the factory paper patterns around 1909. But while researching something else (it happens this way a lot), I came across the shape for this little vase, and a few other miniatures, in a much earlier series - ca. 1905. PN II-2252 is interesting because it is listed in ground colors that are previously unmentioned, including, and most notably, kaiserrot glatt, saatgrün glatt (which this is), opalviolett glatt, steingrün glatt, and dunkelblau glatt, many of which serve as the basis for decors not introduced until a few years later. PN II-2252/II shows the same shape in creta martele with a wild silberiris handle, a'la Ausführung 79, which doesn't appear until 1911. PNs II-2252 through II-2258 are all miniature shapes, and come in many of the same ground colors. I'm guessing that these miniatures were done as salesman's samples - probably not as early as 1905, but perhaps closer to 1909, which is the next time these colors are represented in the paper patterns, and Ausführung 129 is offered on a variety of larger shapes for the first time.

At any rate, this piece, in saatgrün glatt, by virtue of its applied silberiris handles, becomes Ausführung 129, and if my theory is correct, was probably used as part of a salesman's sample set. The only customer listed for these miniature PNs (in Candia Silberiris mit Luster) was Neurath & Klein, Vienna.

For additional examples of this decor, see the Ausführung 129 page on Loetz.com: