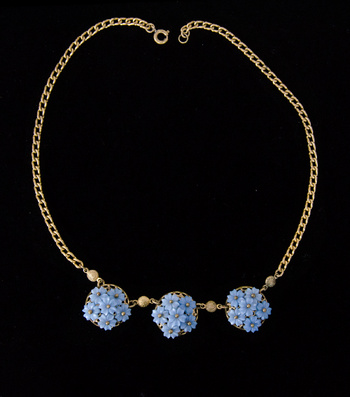 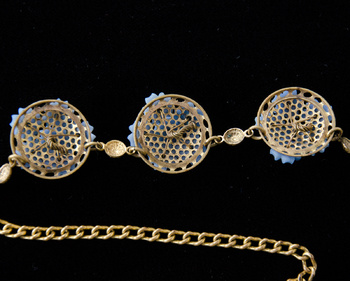 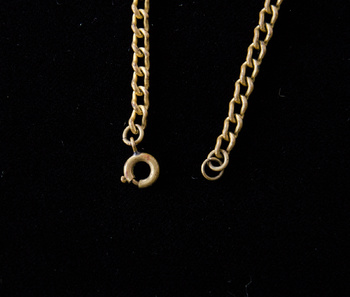 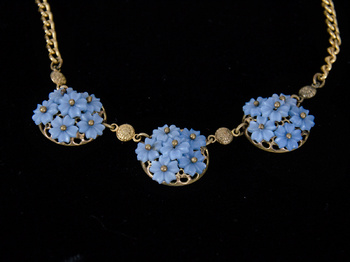 Disclaimer: I am not a jewelry collector, just someone who's been selling some family stuff on Ebay.
The necklace that I'm questioning is brass with blue celluloid flowers.
Length: 17"
Diameter of flowers: 3/4 inch

It was in my mother's jewelry box. She was born in 1926, so it would have belonged to one of her female relatives. Unfortunately, she is no longer alive, so I can't ask her.

I was randomly Googling to try to find some information about the necklace when I found some early Miriam Haskell jewelry that had the same type of flower motif and style of wire mount. I read a bit more.

Why it probably isn't Haskell:
-- It isn't particularly ornate or substantial
-- It has a spring catch, but with a thumb tab. http://idragonrider.com/auctions/Haskell/ relates that there is debate about the thumb tab.

The celluloid flowers are wired into the backs. According to the website Very Vintage:
Very early Haskell pieces had as backs metal plates that were pierced with small round holes at regular intervals (NOT mesh). Beads and pearls were then wired by hand directly on to this base. This back was then left uncovered, giving the piece an ''unfinished'' look. By the 1930''s the back was being covered by a flat metal plate, of which Gordon and Pamfiloff say ''This metal plate is a key identifier for pre-1943 Haskell jewelry" (page 44).http://www.veryvintage.com/authenticating-miriam-haskell-pieces?chapter=0

Also if it dates to the 1920s could it's absence of ornamentation mean that it was created by Haskell before her partnership with Hess?

I'm deeply appreciative for whatever insight you can give me.