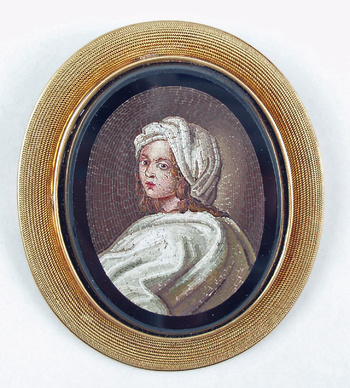 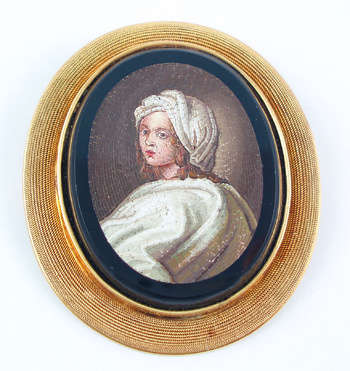 An incredible and rare Antonio Aguatti micromosaic brooch, circa 1800-1820, of Beatrice Cenci set in a high carat gold frame (micromosaic size: 2 5/16 x 1 7/8 in.). This attribution is confirmed by Jeannette Hanisee Gabriel, curator and author of Micromosaics, The Gilbert Collection, and another version of this piece is on page 233.

This micromosaic is after a portrait (purportedly) of Beatrice Cenci in the Uffizi Palace, attributed to Guido Reni. Beatrice Cenci was a young Roman woman who, with her stepmother and brother, conspired to murder her father, Francisco Cenci (1549-98), a wealthy but cruel man. They succeeded in having him murdered in his bed and subsequently, all three were arrested, tortured and eventually executed. Beatrice was made famous by a number of literary works, including a tragedy by Shelley (The Cenci). An excellent review of the story is at this link:
http://www.lrb.co.uk/v20/n13/charles-nicholl/screaming-in-the-castle-the-case-of-beatrice-cenci

Antonio Aguatti (or Aquatti) was one of the most prominent micromosaic artists, working in the late 18th-early 19th century in Rome. Antonio Aguatti introduced two subtle refinements. He produced tesserae in shapes other than square or rectangular and by fusing glass threads of different colors he produced patterned tesserae called millefiori. Millefiori tesserae added a new dimension to micromosaics because they allowed more realistic representations of eyes, fur, feathers, petals and leaves. The finest micromosaics have around 1,400 tesserae per square inch and, at first glance, look like painted enamel.