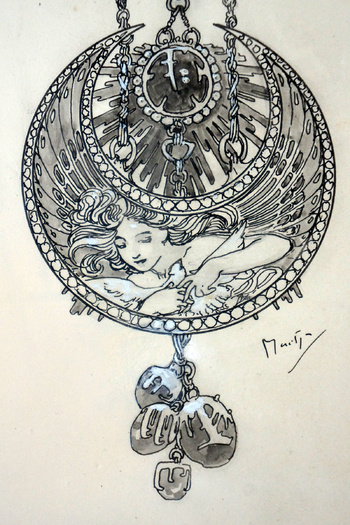 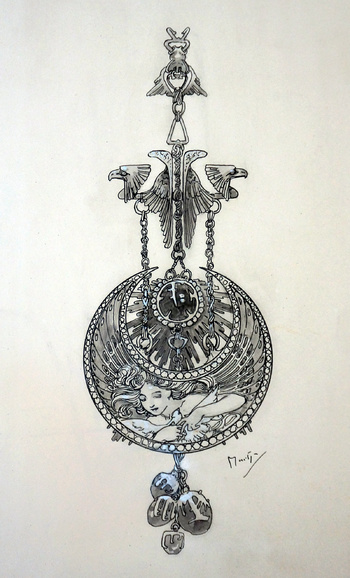 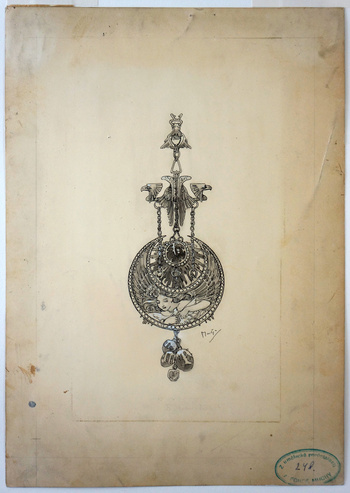 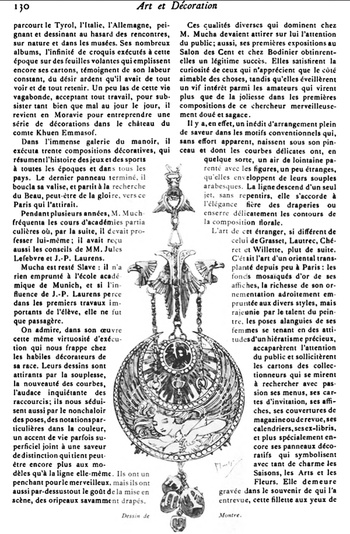 Original design sketch for a pendant watch for the famed French jeweler Georges Fouquet (1862-1957), possibly for presentation at the 1900 Paris Exposition Universelle. Published in Art et Decoration Vol. VII (1900), pg. 130 as “Dessin de Montre” and republished for a US audience in Vanity Fair in May 1901. Black ink heightened with gouache on cream paper. Signed Mucha (lower right).

Mucha and Fouquet collaborated for a short period from 1899 to 1901. At a time when the emphasis had been on precious stones in traditional settings usually derived from the Louis XVI period, Fouquet and Mucha together redefined fine jewelry design, espousing the belief that the beauty of a jewel depends on its artistic conception. Materials were chosen for their contribution to the overall design, not for their intrinsic value.

Mucha conceived a spectacular series of elaborate jewels to be executed by Fouquet in his Paris atelier. Those objects formed the centerpiece of Fouquet's display at the 1900 Exposition Universelle in Paris. In 1901, he asked Mucha to carry out an idea that he had kept in mind for a number of years: Fouquet wanted new premises in which the interior decoration harmonized with the jewelry he was creating. By the end of the year, he had moved his business to the Rue Royale, where the interiors were of unparalleled Art Nouveau sumptuousness. - Metropolitan Museum of Art.

The Mucha designed interiors for Fouquet’s atelier were preserved and are visible for touring at the Musée Carnavalet, 23 rue de Sévigné, 75003 Paris. (see here: http://untappedcities.com/2013/02/14/alphonse-mucha-jewelry-shop-replica/ )

Similar pieces of known Mucha/Fouquet jewelry can be found here, many with the same design motifs or features as in the illustration above: