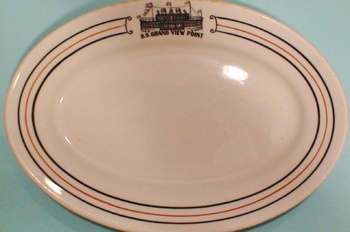 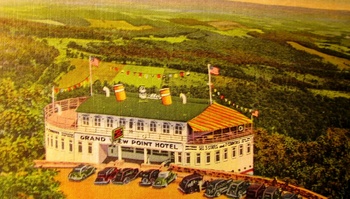 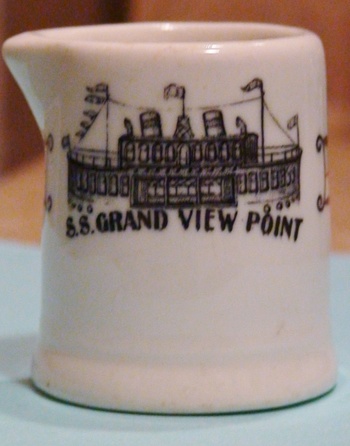 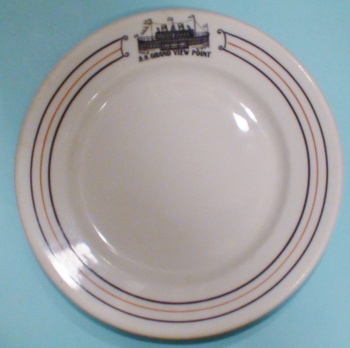 This is one of my favorite things to collect because I remember visiting the "Ship Hotel" as a young child and thought that it was fascinating! I would pass by it often while traveling to Lancaster, Gettysburg etc. I went past the ship just before its tragic demise. It is not easy to find the original dinnerware nowadays and it is fairly expensive (upwards of $100 per piece). I also collect the pennants, menus etc. I am showing two plates and a creamer in this post. The plates were made by Warwick China for the Joseph Horne Company of Pittsburgh, PA. There is also an original postcard showing this great piece of history...

The amazingly cleverly-designed Grand View Point Ship's Hotel & Restaurant was built along the old Lincoln Highway in Grand View, Pennsylvania in 1932. It appeared suddenly as you were driving along and discovered it perched precariously on a steep cliff in the Allegheny Mountains. The owner apparently perceived the idea of the ship as he sat in the previous hotel and thought that the thick fog made it seem as if he were at sea. It was claimed that you could see 3 states and 7 counties from the deck. There was even a large telescope that you could look through. It is stated that many famous people, including Joan Crawford visited the attraction.The business thrived until the Pennsylvania Turnpike construction in 1940 sealed its fate. Business drastically started to decline. The hotel was sold in 1978. It continued on the decline and it burned down in 2001 while efforts were in process through historical organizations to buy and bring the ship back to its former glory. It is sadly missed.