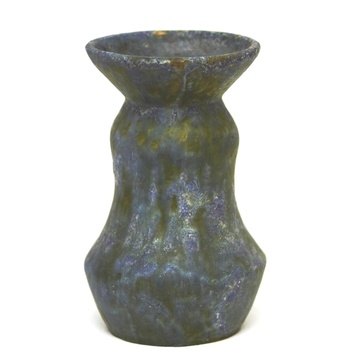 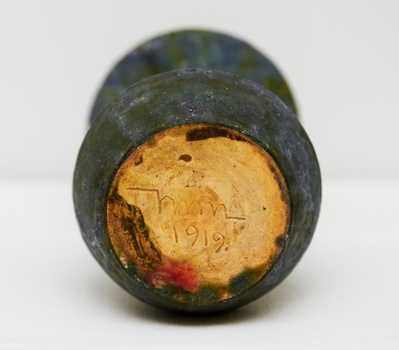 This vase was made by Martin Mortensen (1874-1949) who was - until quite recently - virtually unknown! Teresa Nielsen, director of a small Danish museum specializing in Symbolism and art in general from ca. 1890-1930 has published some articles etc. about him, thus making him known to a larger group. Martin Mortensen was trained as an architect in 1905, but does not seem to have worked as an architect. Instead, he started working as a potter and his vases often have peculiar, 'architectural' shapes. He debuted with an exhibition in 1901 and worked ceaselessly with his pottery until 1907 when he bought Taastrup Lervarefabrik ('Taastrup Pottery', located ca. 20 km outside of Copenhagen) which he had to sell again in 1923, although he appears to have continued working there. The pottery was later sold to one Elisabeth Loholt and was renamed 'Loholt Keramik' in 1942.

Martin Mortensen used different glazes, sometimes matte like this one and often multi-toned, although monochrome glazes are also seen. The vases are often decorated with handles or other decorative and organically shaped elements. I've seen a few of his vases on antiques markets and on auctions, but you don't come across them that often.
Height: 22 cm / 8.7 in. Mark 'mm' for Martin Mortensen and the year 1919 - a year when he appears to have been particularly prolific!