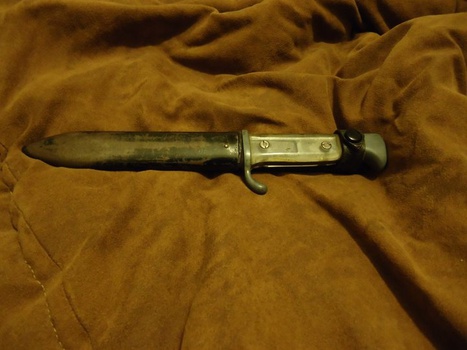 Here we have a WWII Hitler Youth knife thats been in my family for 60+ years. My grandfather said it was given to him by my great uncle Ted. He was a tank Receiver in Europe.

So when a Sherman would get knocked out, by the big bad Panzers he would be the guy to go get it, and pull it back. My grandfather claims my uncle brought this home and gave it to him.

My great uncle is still alive, but doesnt recall bringing this back, but then again he is 88 or 89 years old and lives out in Oregon My grandfather is 82 and has a much sharper mind.

My uncle ted has some things left from the war, a German Luger with 2 clips, he used to have a engine off a German reconnaissance motorcycle, unfortunately that is long gone. I should give him a call sometime and ask him what he has left.

This knife just has the RZM number and thats it. The handle has been replaced with some Air Craft plexy glass other then that its 100% original.