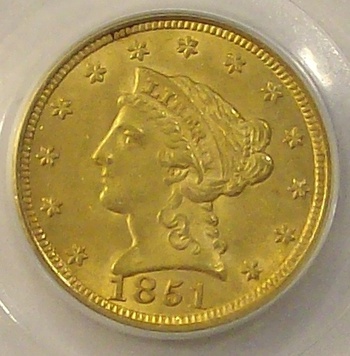 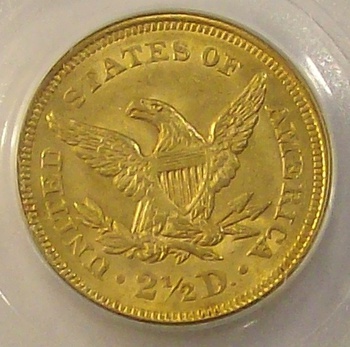 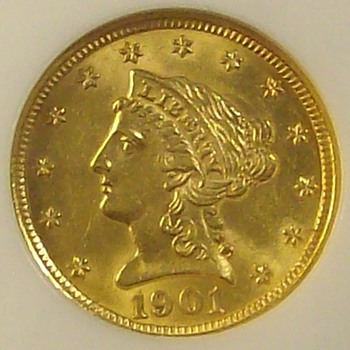 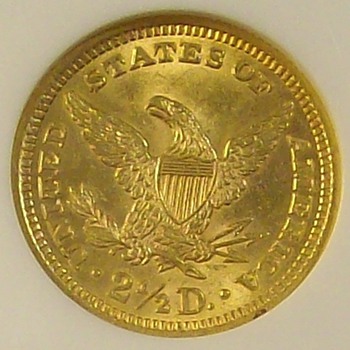 Here are two examples of United States $2.50 gold pieces. Of this smaller denomination I have quite a few. As I have mentioned in the past, coins are my only real passion besides my children & surfing. I've been collecting since I was a kid back in the mid 1960's. These smaller U.S. gold coins were one of the workhorses of the U S economy and for the world economies as well. Both of these examples, while 50 years exactly apart are the same minus a small minute detail that only someone who collects these type coins would know. Both of these are high grade examples and are graded by the very respectable graders of PCGS & NGC respectfully. The U.S. minted gold coins from the late 1700's up to 1933 for circulation in the following denominations. $1.00, $2.50, $3.00, $5.00, $10.00 & $20.00 There were some special pieces struck in a value of $50.00 along with several private mints that struck gold in values of as little as $.25 but these were not minted for the masses. $2.50 back in 1851 or 1901 was a pile of money for the average person. Most of the examples like you see here have been worn out from commerce, and thus very low grade. But the vast majority were confiscated by our own govt when gold was re-called in 1933 and after that, it was illegal to own. Very few survive today in the condition of the two pictured here. If you don't own any gold or silver yet, I beseech you to buy all you can possibly afford. You will not be sorry you did.

US Two and a Half Dollar Gold Coins
See all