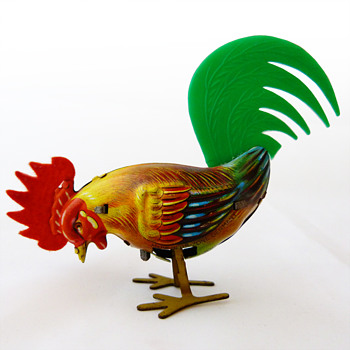 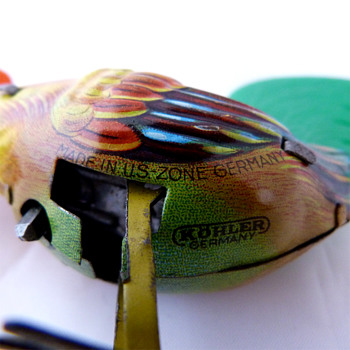 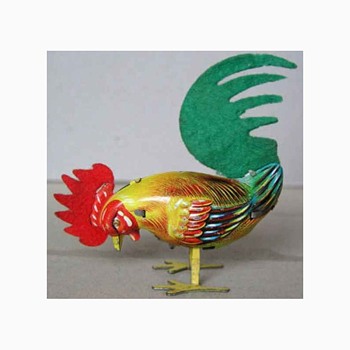 This is one more of Carlos's childhood toys, and an amazing one by the way!
It's one of Köler's lithographed roosters from the 1950s.

According to the little information I've been able to find about Köhler, in 1954 began the production of the first plastic toys which initially were produced of sheet metal and plastic (as the songbird and Puss in Boots with plastic feet... as you can see the tail of the rooster is made out of plastic -whereas the comb is made out of red felt-) so this rooster could have been made art the time). I can also read that in 1965, after the death of her father, the daughter Ute took over the company and the production was enhanced switched to plastic parts. So the rooster was made somewhere between 1954 and 1965. And besides, on the printed text (pic.2) you can see "Made in U.S. zone - Germany". I admit I don't know much about the brand, but don't believe they would use it for a long time after the end of the world, at least not from 1960 onwards... if there's anyone who knows more and is willing to share some info i will be very thankful!

Doing some research online in German -a language I know nothing about, but that works fine when translated from English using google translate- I've found this rooster with a green felt tail... my guess is that is should have been made before 1954, when plastic pieces were introduced