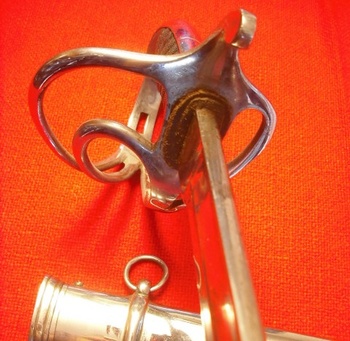 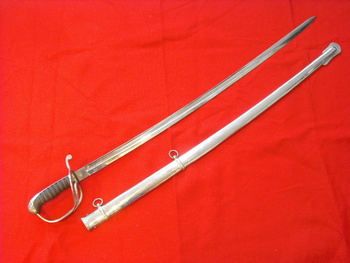 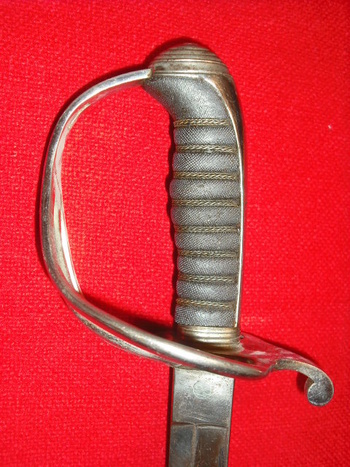 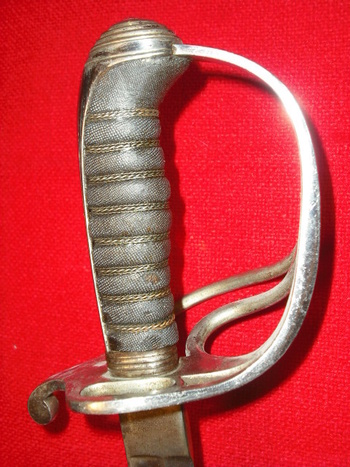 This is the pattern of light cavalry officer’s sword that was in wide use during the charge of the Light Brigade during the Crimean War. It was replaced in 1896 by a new sword with a pierced steel guard that gave more protection to the hand. The Royal Artillery, which adopted the 1822 pattern in 1855, still uses this sword for ceremonial functions.

One of the things I’m intrigued by and at the same time frustrated at in collecting British militaria is that there are so many exceptions to the rule. Several of the Yeomanry (historically volunteer cavalry) as well as many colonial cavalry regiments continued to use the pattern 1822 saber well into the 20th century.

The slightly curved, polished steel blade is 32 ½” long. The hilt is nickeled steel and the grip is wire wrapped shagreen (fish skin). It’s clearly made to withstand wear and use, but unlike the standard pattern which had a knurled thumb rest, this example only has the outline of the border of where the knurling should be. Instead of a brass proof disk in the ricasso, there is only a circular outline of where one should be. I think this may indicate that it was a later production and a less expensive blade available through uniform tailor shops throughout the British Empire.