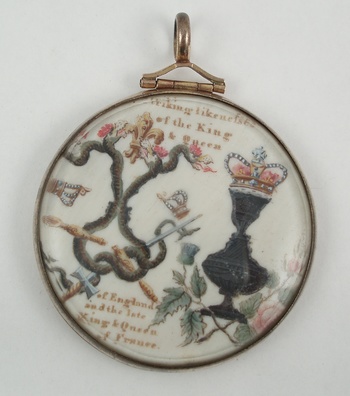 Can you see the two sets of profiles?

George III was King of England when Louis XVI and Marie Antoinette were executed (1793).

The two profiles on the left are George III and Caroline. This would have been made at the height of his unpopularity in the late 18th century.

The urn is for mourning, mourning the death of the monarchy with the crown on top. The crown split in half symbolizes the destruction of the monarchy. The sword of justice slices the serpent - the king. The reference to France is to emphasize George was hated as much as the French monarchy. Apparently King George was so unpopular he was planning to go back to Hanover. He had a set of cutlery made for his return with just the Hanoverian crown on it.

Symbols: broken scepter, broken crown, fleur-de-lis, black urn surmounted by Crown of England along with thistle and rose at base.