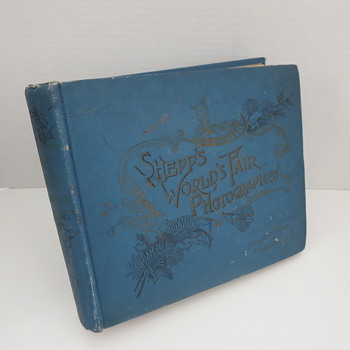 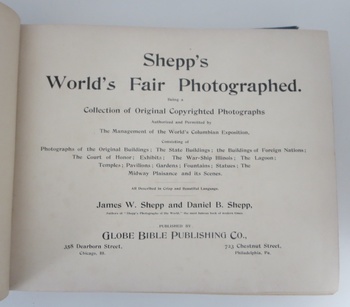 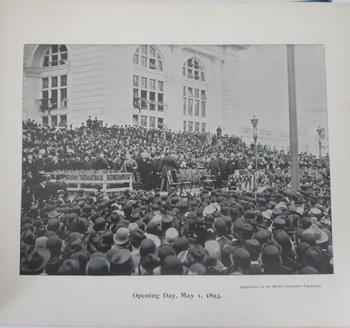 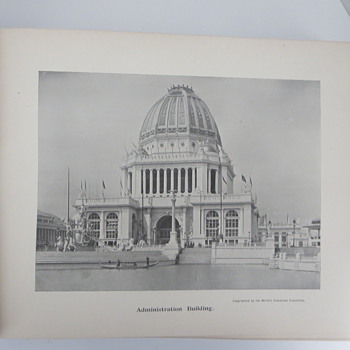 Shepp's World's Fair Photographed
Copyrighted Photographs of the World's Columbian Exposition
Entered according to the Act of Congress, in the year 1893
By D. B. Shepp
Published by Globe Bible Publishing Co.
ON PAGE 3, the World's Columbian Exposition Executive Department Chicago, June 19th, 1893 states: The illustrations in this publication, issued by the Globe Bible Publishing Company of Chicago and Philadelphia are from the original photographs of the World's Columbian Exposition, the use of which is authorized and permitted by the Exposition management.
The book is 11" x 9" x 2" thick, contains 529 pages with approximately 255 photographs of various buildings and exhibits contained in the Exposition grounds which covered approximately 984 acres.
Photo #3 above: Opening Day, May 1, 1893
President Cleveland, attended by his cabinet, appeared upon the grandstand erected in front of the great Administration Building.
Photo #4 above: the Administration Building that could be seen from almost every part of the Exposition Grounds. Its cost was $435,000.00.

I will make more post of some of the different exhibits from various countries attending the Exposition, of which I think might be of interest to some here on CW.