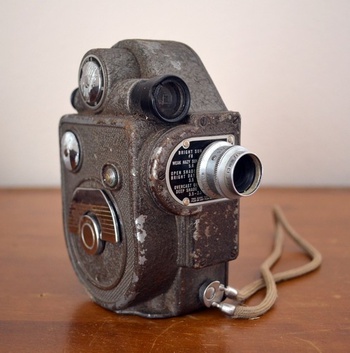 Hi Mike, My name is Dominick Forlenza. I live on the east end of Long Island NY. I watch your show just about every night and I like what you and Frank do. I go to a lot of yard sales and garage sales and look for stuff to buy and sell. I'm 58 years old and retired and I make custom fitted golf clubs the last 6 years. I am writting to you because I have two very old movie cameras that my father use to take home movies of our family back in the 1950's They look like the one in the picture you see attached. One of them is the Revere Eight model 81 and the other is a Revere standard 8 mm model 88 double 8 manufactured in Chicago, Illinois in 1939 Both cameras still are in very good working condition and can take movies. Please find a copy of, The Revere Camera Company Wikipedia reference below. I would like to know the worth amount of these cameras. Also both cameras have the exposure guide on the doors. Hope you can help me. Thank you. teeboxx77@yahoo.com

Revere Camera Company From Wikipedia, the free encyclopedia Jump to: navigation, search
The topic of this article may not meet the general notability guideline. Please help to establish notability by adding reliable, secondary sources about the topic. If notability cannot be established, the article is likely to be merged, redirected, or deleted. (March 2009)

The Revere Camera Company was started in 1920 by Mr. Samuel Briskin, who also started Wollensak Recorders and Opticals.

Founded in 1920 in Chicago, Illinois, USA as the Excel Radiator Company by Ukrainian immigrant Samuel Briskin to manufacture car radiators, but started manufacturing some coarse household products later in the decade. They started making budget 8 mm movie cameras in 1939 through a subsidiary run by Briskin's sons. That company was later merged into Excel Radiator Co. which then changed its name to Revere Camera Co. The Revere name is taken from the Revere Copper Company, which provided financial backing for Excel during the depression.

In the '50s the company was the second largest manufacturer of small movie cameras in the USA and in order to grow that business further the company took over their primary lens and shutter supplier in the form of the New Jersey based Wollensak Optical Co. both to secure their supply of parts but also to gain a more although Wollensak was primarily known as an OEM supplier of parts they had a small range of upmarket still cameras. The Revere brand name had become synonymous with budget cameras and soon after the take-over Wollensak models appeared that were mechanically mostly identical to the standard Revere models but had much better lenses, more stylish casing, and sold for a premium price. The company started manufacturing tape recorders in the early 1950s, that side of the business never became an important part of the company's output.

Samuel Briskin was diagnosed with inoperable cancer in 1960 and rather than leave the company to his family he decided to sell the company to 3M for 17 million USD.[1]