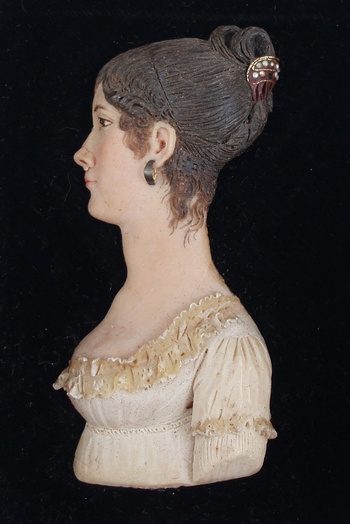 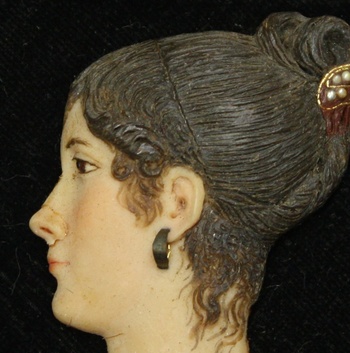 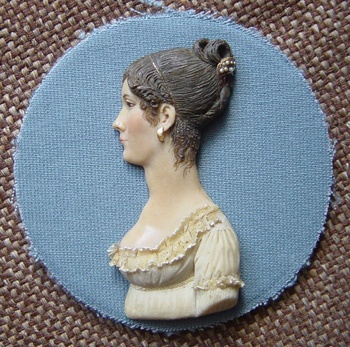 Isn't she beautiful?! This is Mary Loring, a wonderful wax portrait miniature.

The art of modeling in wax most likely started in pre-historical times. It was found in Egypt, Greece, the Roman Empire and was used for models of deities, war gods, dolls, funeral masks, votive offerings and more. During the Renaissance, it was used as part of the process of making statues, medals, cameos and more.

Wax is incredibly responsive to the slightest touch, but extremely fragile as well, subject to both heat and cold. Thus, many items made of wax have not survived.

In America, Patience Wright was the first pre-eminent wax portrait artist, as in 1769, she was left a widow with three children to support. She made many of her models in full life size and shape and was the rage in London where she moved in 1772.

For the most part, wax portraits were produced by itinerant artists traveling up and down the East Coast. One of the better artists working in the early part of the 19th century was John Christian Rauschner who found work through advertisements in local newspapers.

Rauschner was known to color his wax all the way through for the main parts of the portrait, then painting the smaller parts such as eyes, mouth eyebrows, etc. He apparently made a mold of plaster of Paris for each subject, then pressed the colored wax into the mold, part by part. After the main work was completed, additional details such as the lace on a dress, jewelry, flowers would be added, with the use of seed pearls being quite common. The portrait would then be mounted in a frame with rounded glass.

I bought Mary at an auction and she arrived in a small cardboard box. Here is the auction listing:

As you can see by the first couple of photos, Mary was a bit rough. Her nose had come off at some point and was stuck back on. Her hair was missing its ribbon, her earrings and hairclip were black, and she was quite dirty. But her clothing and accessories are so clearly of her era!

I hand-carried her to a restoration artist in Baltimore and you can see her very fine work in the final photo (before she was framed). I have been looking for more of the portraits, but most are of very stodgy looking men.... No one has matched Mary!